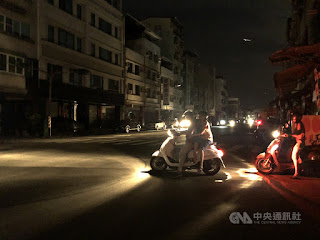 1. Linbian Township 林邊鄉
1a. The local water utility informed residents of Linbian and nearby Donggang that the pressure of the water entering their homes may be reduced as a result of the recent power plant failure in Kaohsiung. 分區供電水公司預防性通知  林邊東港部分用戶可能減壓供水
1b. When it (doesn't) rain it pours?  Linbian was among several areas affected by recent power outages.  There may be more such outages on the way. 南高屏花東5縣市  停電17萬多戶
1c. Banana insurance!  The Department of Agriculture is now insuring the banana crop in certain cities and townships.  Linbian Township is among the townships hurrying to apply for this type of insurance. 香蕉收入保險理賠率達233%  農糧署籲14日前投保 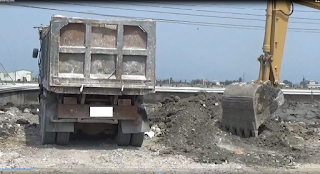 2. Jiadong Township 佳冬鄉
2a. Several men illegally disposed of construction waste in connection with a solar panel installation project in Jiadong.  They are under investigation at the time of writing. 屏東佳冬魚揾周邊太陽光電整地  竟回填非法廢棄物 (1)
2b. The Pingtung County Government has spent a lot of money to remodel Jiadong Junior High School.  The Pingtung County Magistrate was recently on hand to inaugurate the new facilities. 屏東佳冬國中新建校舍啟用  潘孟安盼學子能惜福認真學習 (2)
2c. The Pingtung County Magistrate also visited a restaurant serving "soup rice" in Jiadong.  This dish, which is considered "home cooking" in the area, consists of rice served in pork broth, with fish and bamboo shoots. 屏東人的家鄉味  市長潘孟安帶你吃 "飯湯" (3) 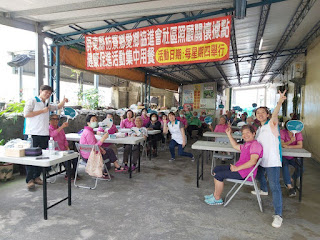 3. Fangliao Township 枋寮鄉
3a. This article is nonsense bordering on paid advertising and/or propaganda, but the Shengli Corporation has been hosting activities throughout Fangliao for "the benefit" of elderly residents.  They're obviously trying to smooth the way for future solar panel installations, and reduce opposition to their plan to install panels near Xinkai Village, where a large swath of land has already been deforested. 生利能源前進枋寮社區關懷據點  陪伴地方長者 (4)
3b. Kind of embarrassing.  Several Mother's Day couplets were spotted outside the Fangliao Township Mayor's office, but two of the words/characters on one of the couplets are often used in connection with funerals.  The Township Mayor later admitted that these couplets had been outsourced from another area. 模範賀榜題母得長昭  枋寮鄉長挨批
3c. COVID-19 has been on everyone's mind lately.  One of the confirmed cases visited Loong An Temple from another area. 屏東公布2確診者足跡  曾至車城 , 枋寮 , 東港華僑市場 (5) 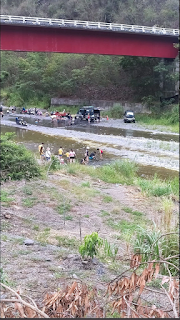 4. Chun Rh Township 春日鄉
4a. The Mayor of Chunrh Township recently complained about tourists visiting the area, climbing local trails, barbecuing and playing with water in local rivers.  According to him the residents there have been wearing masks and staying home, while many tourists are using it as a playground. "同島一命 , 有嗎 ?"  屏東春日鄉長看到遊客戲水怒了 (6)
4b. Residents of Chunrh have even taken to cordoning off the road into Gueichong, and turning away visitors from outside the township. "春日部防衛隊"  為家鄉把關  竟遭登山客譙三字經 ! (7) 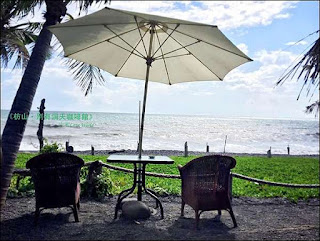 5. Fangshan Township 枋山鄉
5a. One of the recent COVID-19-positive cases stopped to have coffee on the beach in Fangshan. 屏東今新增3例 , 朋友出遊感染  匡例21人採檢隔離
5b. Military personnel were recently thanked by the mayor of Fangshan Township for their assistance with a recent train accident in Jialu. 586旅官兵義助車禍傷患  鄉長致謝 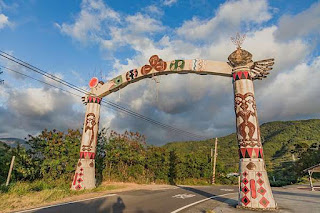 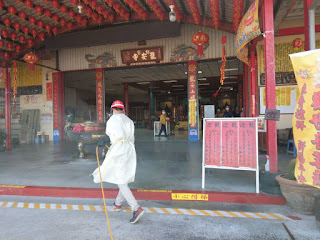 7. Checheng Township 車城鄉
7a. Fu An Temple in Checheng seems to be a hotspot for COVID-19.  This article only mentions two cases, but there have been others since it was written.  Many other temples as well.  2確診者南下屏東進香與訪友  足跡爆光
7b. The Pingtung County Government has designated three "youth bases" in the county.  One of these is the old Hot Spring Police Station in Checheng.  These youth bases will focus on youth-oriented farming, economic and travel innovation. 屏東再造3處青創基地 (8) 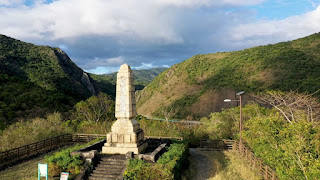 8. Mudan Township 牡丹鄉
8a. Residents of Xuhai Village recently complained that the Mudan Bay Villa is still accepting guests, and that many of these guests are from the north of Taiwan, where the epidemic is most serious.  Villa staff responded that disinfection work is ongoing, and that many reservations have been cancelled. 屏東疫情 !  居民控牡丹灣villa訂房仍有7成  還接疫區客  業者喊冤 : 快退光了
8b. This article links to a podcast about the Mudan Incident Monument in Mudan. 原民聚落系列 : 屏東排灣高士部落  昔日古戰場今日文化寶地
8c. A student in Mudan won a Presidential Education Award. 不畏困境奮發向上  屏東排灣學子獲總統教育獎 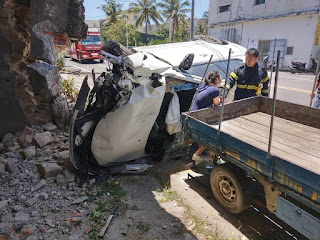 9. Manjhou Township 滿洲鄉
9a. A driver in Manzhou lost control of his vehicle and drove into a house.  Both he and his female passenger received minor injuries. 屏東滿州小客車撞進民宅  車頭全毀 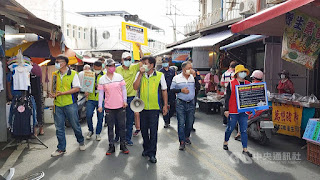 10. Hengchun Municipality 恆春鎮
10a. Staff at the Hengchun Municipality Office took to the streets to alert local restaurant owners that dining in is not acceptable. 疫情升溫仍有遊客  恆春鎮公所廣發僅共外帶公告
10b. Many tourists patronizing local homestays haven't been wearing masks, and the Pingtung County Government has called in people to investigate. 恆春民宿遊客遭指不戴口罩群聚開趴  縣府派員稽查
10c. The mayor of Hengchun Municipality recently visited Kenting's famous night market in an attempt to encourage patrons to wear masks. 墾丁大街人流管制  恆春鎮長上街呼籲戴口罩 (9) 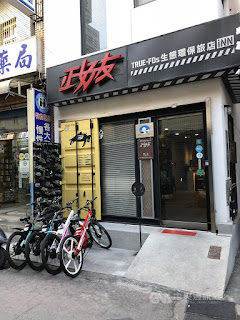 11. Liuqiu Township 琉球鄉
11a. Homestays operating on Xiaoliuqiu have closed their doors, and restaurants there now only offer take-out service. 疫情警戒提高  小琉球業者聯合響應休業
11b. I have no idea how to say "ma hua juan" 麻花捲 in English.  However you say it, those twisty cookies associated with Xiaoliuqiu are advertised in this article.  Is it just me, or is the English name of their beer different now? 小琉球  "海島伴手禮"  推薦 ! 在地人都愛的麻花捲 , 超Q凍凍果 , 澎湃干貝醬 ..
11c. As a further measure against the spread of COVID-19, all of the tourist sites on Xiaoliuqiu have been closed. 守住屏東海外淨土  小琉球封鎖全景點
Related Entries 相關的文章:
Fish and Fishing 屏東的漁業
Roaming Around Shrdze Township 獅子鄉遊記
台灣的老街 Old Streets of Taiwan 2
Pingtung in the News 屏東的新聞 (Central 中) 3
1. There have been lot of shady dealings in connection with these solar panel developments.  They tend to target local farmers, urging them to "grow electricity."  These developments are also creeping closer and closer to protected areas, and there is little oversight.  Catching guys doing this kind of thing in coastal Jiadong would be especially hard, given the mazelike nature of the roads around there.
2. Not in the news, but they'll be getting their first foreign teacher next year too.  Barring COVID-related complications of course.  I ride by the place every Tuesday and Friday, and there's a big banner celebrating the arrival of this foreign teacher next year.
3. The title of the article misidentifies Pan Meng-an as the Pingtung City mayor.  The text of the article uses his correct title.
The county magistrates and city mayors pop up a lot in the local news, for one of three reasons: 1) they wanted to promote themselves (or local industries/events), and called journalists in to attend an "event," 2) someone else wanted to use the county magistrate or city mayor's presence to help promote something, and 3) there was a newsworthy event that the county magistrate or city mayor was involved in.  The first two types of articles tend to be more "local," and reveal more about local people's lives.  The third type of article is ALWAYS more interesting, primarily because the city mayor or county magistrate had less control over the content.
4. This has been an ongoing thing.  Refer to the last Pingtung in the News (South) for further details.  That company is getting a lot stealthier at doing this kind of things, and one can only hope that local farmers see through their tactics.  I'm not against solar power by any means, but this corporation's way of doing business is very suspicious.
5. This report is a bit out of date.  It mentions a confirmed case visiting Checheng and Donggang as well, but there have been other instances of confirmed cases visiting other parts of Pingtung.
6. In fairness to the tourists, it's not all them.  Someone in Chunrh invited me to an "activity" there not long ago.
7. Most of these visitors would be hikers headed up to the Jinshuiying Historic Trail trailhead.  Most hikers take a taxi or bus through Gueichong and start their hike very high up in the mountains.
8. The Taitung County Government tried this kind of thing when I lived there.  It didn't work well.
9. This article was written on May 15, before Pingtung County officially went to "Level 3."
10. The funny thing is that 99% of this stuff isn't made on Xiaoliuqiu, but rather in nearby Kaohsiung.  Xiaoliuqiu is only about 12 km around - where would they make all those cookies?  Brew all that beer?  Make all that candy?
於 5月 27, 2021