We visited Nantou County a few days before Chinese New Year.  From Taitung City we drove to Jiayi City, spent the night, and then drove into Nantou the following morning. 我們過年前去南投縣玩了幾天.  我們從台東市開車到嘉義市, 在嘉義市過一個晚上, 隔天早上去南投.

It was a peaceful drive.  Most people's vacations hadn't started yet, and as usual we were traveling opposite the flow of traffic.  Everyone else was going south while we were going north, or west while we were going east. 一路上交通很順暢.  大部分的人還沒開始放假.  跟以往一樣,  我們開往目的地的方向跟大多數人相反,  也就是他們往南部我們就往北部, 他們往西部我們就往東部. 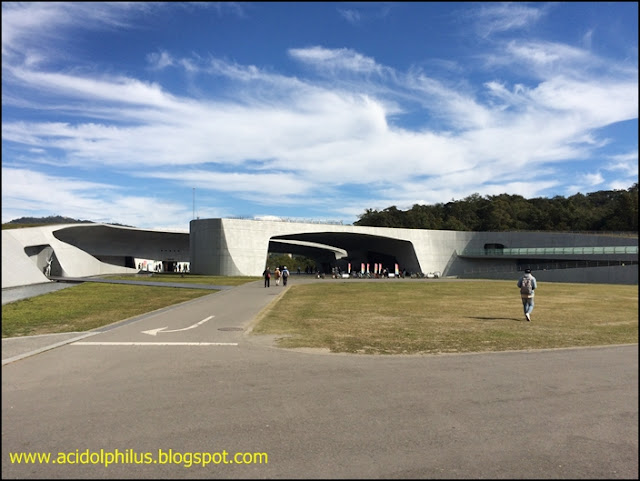 After arriving in Nantou County, we stopped at the Sun Moon Lake Visitor's Center*.  There's nothing special about this place, but the building is kind of interesting. 我們一到南投就到日月潭遊客中心.  這個地方不是很好玩, 可是建築物很特別. 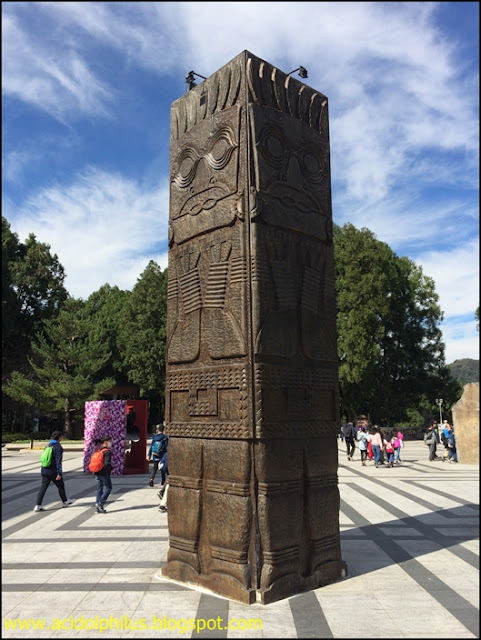 The Visitor's Center aside, finding a parking spot around Sun Moon Lake is difficult.  After a couple unsuccessful attempts at parking near the lake, we wound up at the Formosan Aboriginal Culture Village, which lies on a hill above it. 除了遊客中心之外, 在日月潭找停車位是很麻煩的事情.  我們嘗試了幾次就放棄了,  直接到山坡上的九族文化村.

The Aboriginal Culture Village is something halfway between a museum and an amusement park**.  The top half is full of exhibits on Taiwan's aboriginal tribes, and the bottom half is full of rides and overpriced food.  You can also board the cable car from there. 九族文化村介於博物館和遊樂園之間.  上面的一半有原住民文化的展示及表演.  下面的一半有遊樂設施跟很貴的餐廳.  也可以從這邊坐日月潭的空中纜車.

The entrance fee for the Aboriginal Culture Village is 850 NT, with additional fees for parking.  It's not cheap, and it's definitely not awesome, but the price of riding the cable car is included in your ticket. 九族文化村的成人票要850元, 還要加停車費.  這個景點不便宜, 也沒有那麼好玩, 但票價中包含了乘坐空中纜車的費用. 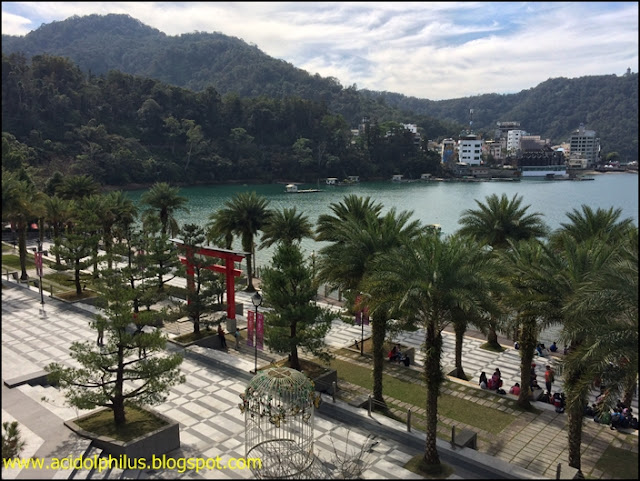 This picture was taken from the cable car as it reached the lake.  The views from the top of the cable car's route were more impressive, but I don't like heights and I was too petrified to take pictures. 這個照片是在空中纜車快到日月潭的時候拍的.  空中纜車爬越高風景越美, 可是我害怕很高的地方, 所以沒拍照. 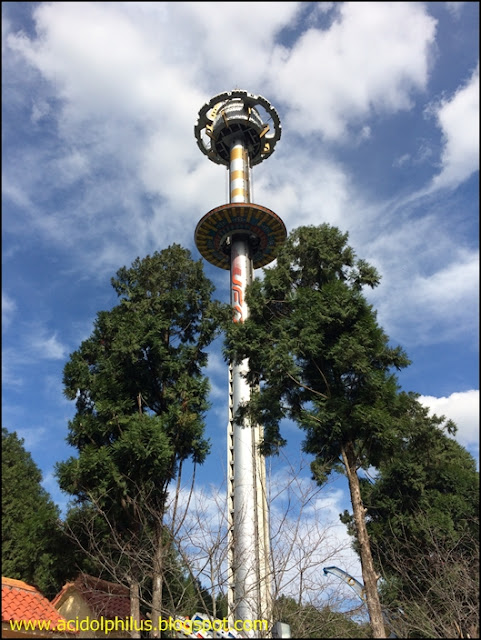 After re-arriving in the Aboriginal Culture Village our younger daughter wanted to go on some of the rides.  Their roller coaster looks SO old, and I was almost worried it would come apart while she was on it. 我們回到九族文化村的時候, 我女兒想玩遊樂設施.  只是樂園的過山車看起來超級舊.  我有點緊張她在玩的時候會出問題. 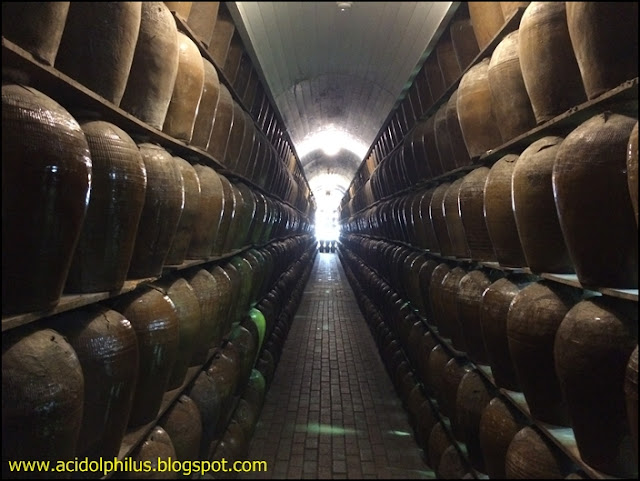 After the Aboriginal Culture Village we visited Puli's Rice Wine Distillery.  I have the feeling they don't see a lot of foreigners here.  My favorite thing about this place was the "Drunken Experience" room, which is a booth attempting to simulate the feeling of drunkenness through a sloped floor, mirrors and psychedelic art. 離開九族文化村後我們去埔里酒廠.  來參觀這裡的外國遊客不多吧!  我在這裡最喜歡的部分就是他們的 "喝醉體驗小屋."  他們利用傾斜的地板, 鏡子還有迷幻藝術讓人體驗喝醉的感覺.

I had a beer while I was there.  The rice wine sausages were good.  Would I go back a second time?  Nope. 我在那裏喝了一杯啤酒.  他們的米酒香腸不錯.  我會再去嗎?  不會. 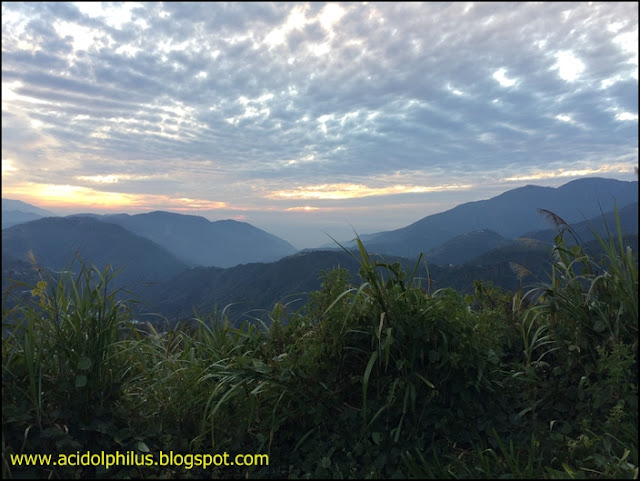 From Puli we drove up to our hotel in the mountains.  Our hotel was just ten minutes down the road from Qingjing Farm***.  Aside from Sun Moon Lake, Qingjing Farm is the most famous tourist attraction in the area.  The view up there is amazing. 我們從埔里開車到山上的民宿.  我們去的民宿離清境農場開車10分鐘.  除了日月潭之外, 清境農場就是那附近最有名的景點. 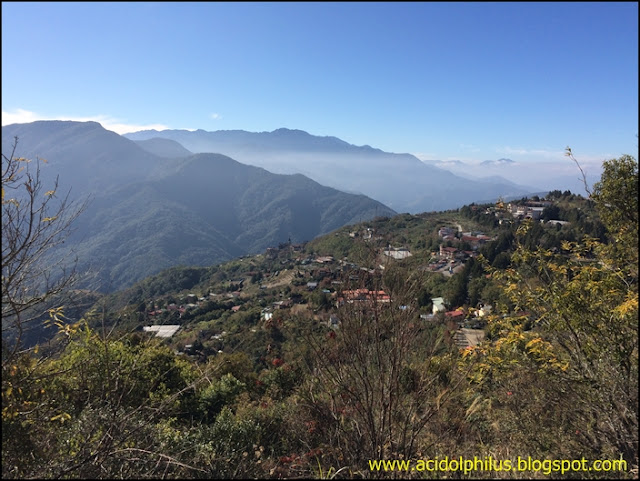 The next day we went up to Qingjing Farm.  We parked at the main food/concession area, and paid to walk along a scenic trail.  As with Sun Moon Lake, it's not an easy place to park. 我們隔天上去清境農場.  我們把車子停在休閒中心, 之後買門票走空中步道.  這附近跟日月潭一樣, 停車位不多. 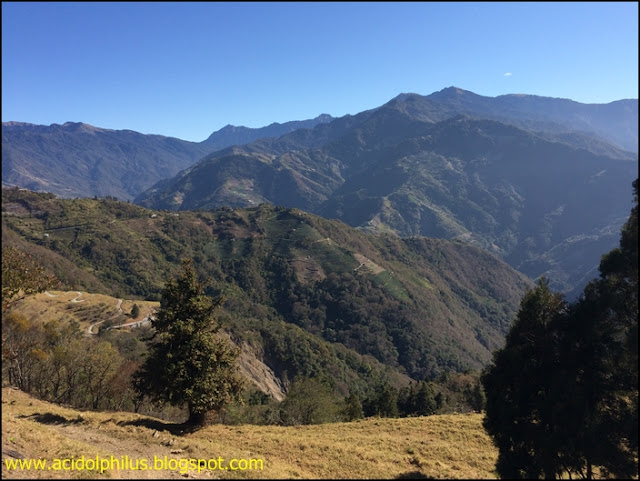 Qingjing Farm itself isn't that interesting.  The scenery is glorious, but the part you need to pay for seems like more of the same.  I guess you could pay to go in there, but just walking around that area is enough. 清境農場不是很有趣, 但是風景很漂亮.  我猜想該買門票的地方應該跟附近的風景差不多, 所以不買門票只在附近散步欣賞風景也不錯. 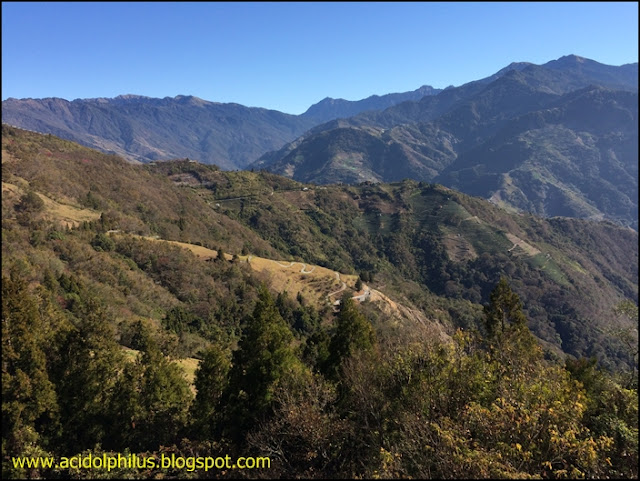 Surprisingly, Qingjing Farm is only about half as high as the highest point on this road.  We briefly considered going all the way up there, but by that point we all wanted a break from the car. 清境農場的位置只到這山路最高點的一半,    我們考慮過再到更高的地方, 可是後來我們決定不要再開車了. 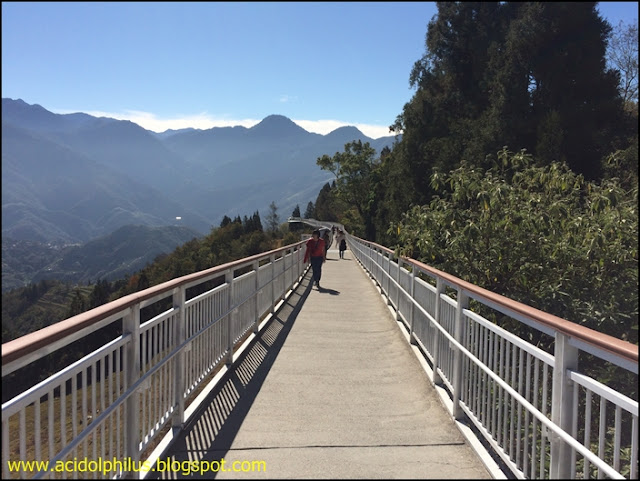 This walkway is, by the way, relatively new.  It'll cost you 160 NT on a weekday and 200 NT on a weekend.  Its terminus is the main entrance to Qingjing Farm. 這個空中步道比較新.  平日票要160元, 周末要200元.  步道的終點是清境農場的大門. 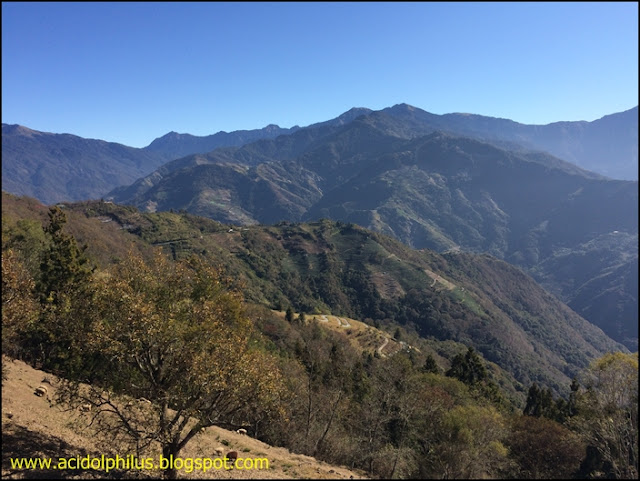 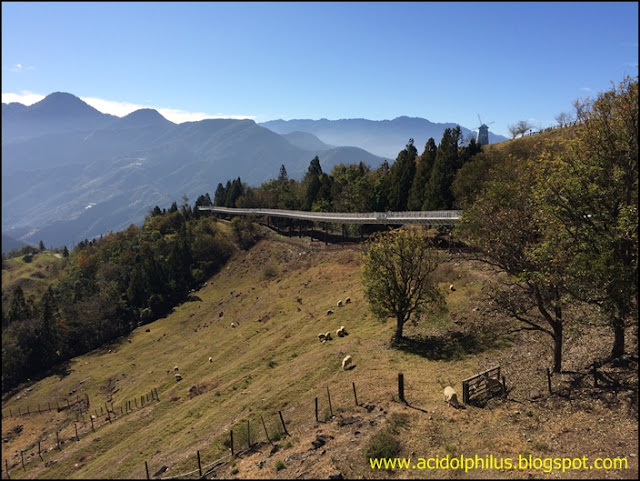 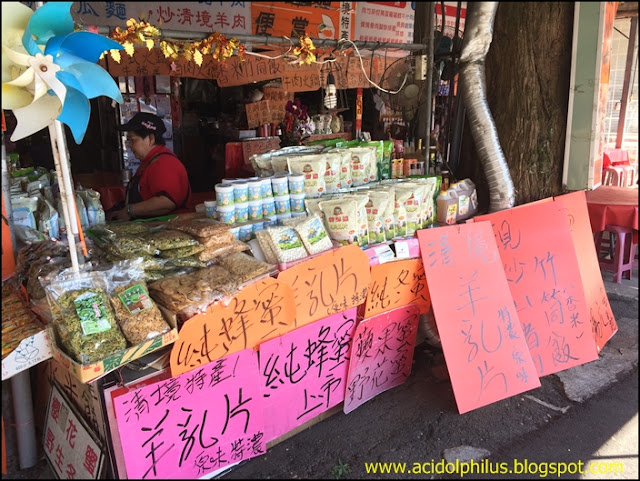 There are also plenty of stands like this one in the area.  Some of them double as restaurants. 那附近有很多這種攤子.  有的攤子也額外經營餐廳. 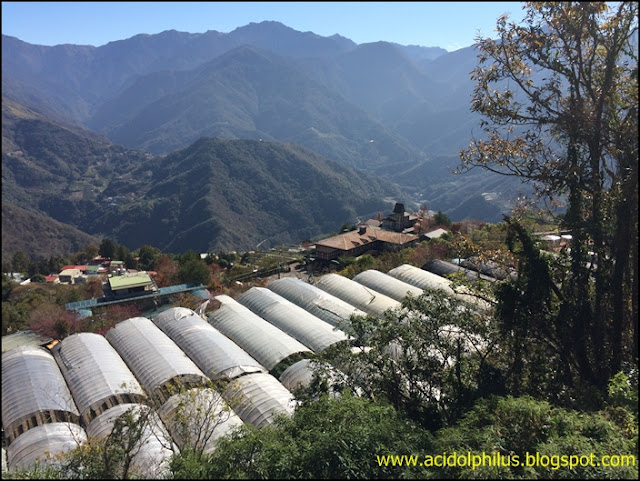 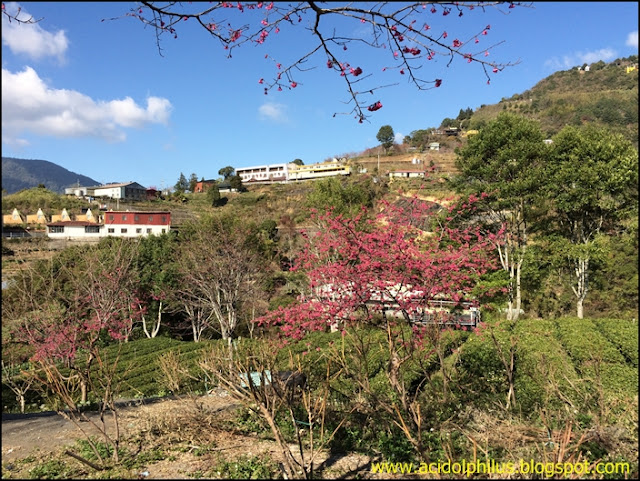 This last picture was taken on the way back down.  It was Chinese New Year's Eve, people were starting to worry over the coronavirus, and we were in a hurry to get to Kaohsiung. 最後一張照片是除夕下山的時候拍的.  大家開始擔心冠狀病毒, 我們也趕著去高雄.

A fun trip?  Yeah, I guess it was.  I hadn't been to Nantou in over 15 years, and it was nice to revisit the area. 這次的旅遊好玩嗎?  我覺得很不錯.  我十五年左右沒去過南投, 再次去那裡的經驗滿好的.

*There are several visitor's centers around the lake.  I'm referring to the first one you come upon as you approach the lake from the south, on Highway 1 Alternate.

**Have I been to every amusement park in Taiwan?  Maybe.  In my honest opinion, the Aboriginal Culture Village ranks pretty low in terms of amusement.  If you have smaller kids they might like it, but it's pretty old and unsafe-looking.  Foreigners living on the west side of the island might enjoy the upper, more museum-like half, but coming as I did from Taitung there was nothing of interest there for me.