For the "Retrospective" entries I'll be revisiting posts from ten years ago.  The post referenced below is from 2009. 在這些 "懷舊的" 文章我再看十年前的文章.  下列的文章是2009年寫的. 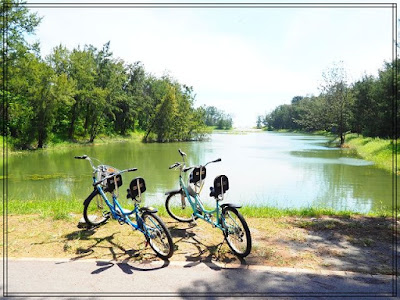 "During most of my time in Taitung I've gotten around by bike. When I first moved here, this was the only option available to me, since at that time I was too poor to buy any other form of transportation. After a few weeks I got used to getting around this way, and even though we now have a scooter I only ride it once a week.在臺東的大部分時間我都是以腳踏車代步,剛開始是因為這是我們唯一買得起的交通工具,幾個禮拜後就習慣了,就算現在我們有一輛摩托車,我一個星期只用一次接小孩."

Did we have a scooter ten years ago?  Man, I really don't remember that.  We must have had a scooter because I wrote about it here.  I sure don't remember it! 我們十年前有摩托車嗎?  我真是記不得了.  我在這裡提到摩托車, 所以一定有.  我真的忘了!

I still go almost everywhere by bike.  We do own a car and scooter however.  I sometimes ride the scooter to visit friends outside of town.  We sometimes drive the car up the coast on weekends. 單車還是我最常用的交通工具, 可是我家也有汽車跟摩托車.  我有時騎摩托車去市區外的朋友家.  我們有時也會在周末開車到東海岸玩.

"We'll probably be buying a car soon. That is if we can find one that's reasonably priced and not a total wreck. This car will be purchased in anticipation of Chinese New Year, and the trips we hope to take to the other side of the island. In the interim, between now and January; there will be only my bike and I, and I cannot feel too much regret at not having a car right now.我們可能近期買輛二手車,但這取決於價錢及車況,因為我們希望可以在過年期間到西部去拜訪親友,所以從現在起到一月這段期間,應該還是我與我的腳踏車為伍."

The car we eventually purchased was a 20+ year old Ford Festiva, and damn that car was a piece of crap.  I was SO slow, and it broke down all the time.  You don't even want to know what it was like to take that thing on the freeway.  Let's just say it got scary fast. 我們那時買的車是一台車齡二十年的福特汽車公司的festiva.  那台車又慢又常需要修理.  開那台車上高速公路是一件很可怕的事情.

Many years later we bought a new Nissan Tiida.  This is a popular model that you can see all over Taiwan.  After driving the old Festiva for a couple years the Tiida felt like a Ferrari. 幾年後我們買了一輛日產汽車公司的tiida.  這種車在台灣很普遍.  開過那輛festiva之後,  覺得tiida開起來跟法拉利一樣快.

"Taitung is a great place to own a bicycle, and I cannot understand why so many people insist on driving all the time. Given the population of Taitung City, you wouldn't think that traffic jams are possible here, and yet every weekday from 5 to 6 this is exactly what I see taking place. I cannot think of anywhere in Taitung City that is farther than thirty minutes away by bike, and yet people insist on driving their cars to work or school every day. In the summer you might use the heat as an excuse, but it's now the end of October and the weather is far from hot.臺東是最適合騎腳踏車的地方,我不明白為何大部分人還是堅持開車?從人口數來看,臺東不應該會塞車的,但它真的在每天下班時間發生了,臺東市區任何地方的距離騎腳踏車都不超過30分鐘,可是很多人還是每天開車上下班,在夏天你可能以天氣太熱為藉口,但是現在正是秋高氣爽的好時節."

I still agree with all of this.  Most people really don't need to drive as much as they do. 我還是同意這個部分.  大部分的人其實不需要開那麼多車.

Last weekend we rode our bikes to the Li Ji Badlands, just northwest of the Train Station. It was an enjoyable ride, with stops at parks along the way, and a lunch just before coming home. As we went, I could not help but think where we might have gone if we owned a car. Hualien I guess, but how often can you go to Hualien? There are nice places there, but there are also many nice places within Taitung City.上個星期我們騎腳踏車到新火車站西北邊的利吉惡地,一路上有許多的休息景點,沿途風景怡人,在我們的騎程中我忍不住想到如果有部車就可以到更遠的地方,可能是花蓮,但是另一方面,花蓮雖然有許多漂亮的地方,但是臺東美麗的景點也不少.

I haven't been up to Li Ji in a while.  Not exactly sure why, but I just don't like it the way I used to.  Part of it might be all the bicycling I've done up there.  One year I trained very hard for the "Loving 197" bicycle race, and this meant going back and forth through Li Ji a lot. 我很久沒去利吉了.  我不知道原因, 只是我不像以前一樣對它有興趣.  可能是我之前常騎腳踏車去那裡.  因 為有一年我很認真的準備戀戀197的單車比賽, 所以常在那附近騎車.

I think I was a little dismissive toward Hualien at the time, perhaps because I was less familiar with it.  I really like the areas between Fu Li and Guang Fu in the East Rift Valley.  I've even considered moving up there more than once. 我想我以前對花蓮不屑一顧是因為我對它不熟.  我很喜歡花東縱谷的富里到光復一帶.  我也曾經考慮過搬到那邊去.

"When you buy a car you are making your world much larger. Places that were previously too far become very near, and excursions that would have been very complicated suddenly become very simple. This is not always a good thing. By passing by those places near at hand, we can easily forget the places outside our own front doors. In longing for what lies in Taipei, Kaohsiung, and Hualien, it is so easy to forget all the good things right here, in Taitung.擁有車子是可以讓人的活動範圍增大許多,很多地方變得不再遙遠,可是那也不一定都是好的,因為你可能因此就錯失了近在咫尺的美好."

I still agree with this but I can't say that having a car isn't nice.  Of course you can always rent one if you need it, but owning a car makes typhoon days less problematic.  If I lived in one of the big cities I doubt I'd own a car, but yeah, having a car makes living on the east coast much easier. 我還是同意這個部分, 可是有車也是件不錯的事.  當然有需要的話可以租車, 可是颱風天時, 有車的家庭不會碰到那麼多問題.  我如果住在大都市應該不會有車, 可是在東部, 擁有一部車讓生活方便許多.

"I've noticed more people riding bikes lately. This is a good thing. With recent improvements to the trail system, there are indeed a lot of places you can visit on a bicycle. Yes, it's hot sometimes, and yes, sometimes you get caught in the rain, but if you aren't the kind who normally pursues this kind of exercise you might give it a try. Weather permitting, we'll be riding to Fu Gang this weekend. Perhaps we'll see you there?有越來越多人加入騎腳踏車的行列,隨著腳踏車道的改善與完成,你可以到的景點更多了,是的,有時天氣太熱有時下雨,但是你真的該試試這項運動,如果天氣許可,我們這週末想騎腳踏車到富崗,也許你會在那裡看到我們."

This was probably written as the "biking fad" was winding down.  Bike stores were opening up everywhere, and a lot of people were buying new, modern bikes to replace their old ones.  Unfortunately people can only own so many bikes, and Taiwan's population is shrinking, so that market was only going to grow for so long. 我寫這文章的時候騎單車是件非常流行的事.  到處有新的單車店, 很多人買新型及現代化的單車取代舊單車.  可惜人們能買單車的量有限, 人口也慢慢減少了, 所以單車的市場的成長也有限.

"Riding to Fu Gang."  I think that was as far as my family ever rode together.  Maybe once we went a little farther, to Shiao Ye Liou, but that was definitely it.  We still talk about riding to the Green Island Ferry and taking the bikes over there, but in ten years we still haven't done it. "騎腳踏車到富岡."  我想富岡就是我們全家一起騎單車到的最遠的地方.  有可能我們曾一次騎到小野柳, 可是一定沒有超過那裡.  我們仍是在討論騎到富岡漁港, 然後帶單車一起去綠島, 可是十年了, 我們只是討論而已.

What May Or May Not Be Going On In My County
Retrospective 懷舊的 1: Where is Taitung?
What's Going in Taitung City and County Townships/Municipalities 台東市,鄉,鎮最近動向 6
10 and 20
於 10月 08, 2019