What's Going On On My Street 我的住家街道 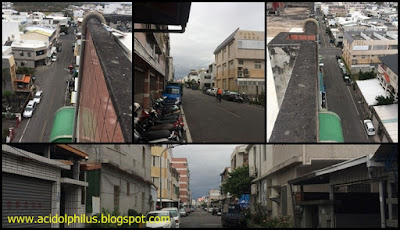 My street is not far from Ma Heng Heng Boulevard and Bao Sang Junior High School.  You could say that my street is on the way to the Taitung Train Station, if you know the shortcut on the other end of town.  我家位於馬亨亨大道不遠處的街道, 離寶桑國中很近.  如果你知道從市區到台東火車站最快的路線, 那也可以說我家這條街位在往火車站的路.

My street is shaped like a reverse letter "J."  This was something I learned recently, after walking from one end of my street to the other.  I'd previously assumed that my street ended just a few houses down from the Fang Fu* Coffee, but after walking there I discovered that it curves around to the right, and leads to another street near the local vegetable market.  我家街道的形狀像相反的"J".  這是我最近從這條街的起點走到終點的時候才發現的.  我以前認為它的終點靠近芳埠咖啡, 可是走到另外一邊的時候才發現順著街道往右是通往果菜市場的路.

We would have bought the second floor apartment we were living in on Chang Sha Street, but the owner was asking too much for it.  We never thought about buying the house on Luo Yang Street, because we thought (incorrectly) that we were moving back to Seattle for good.  In the end it all worked out, because I think my present street is better than those other two I lived on.  我們住長沙街的時候想買那裡二樓的公寓, 可是屋主開的價錢太高.  我們沒想過買洛陽街的房子, 因為那時候的想法是要搬回去西雅圖.  最後所有的事情都解決了, 我現在住的這條街比之前住過的二個地方都好.

So now I live on the other side of town.  Some people think where I live is far, but I don't think so.  I have friends who live as far away as Dulan and Cheng Gong, and even they commute into Taitung City every day.  Compared their drive to work, my 15 minute bike ride doesn't seem like a big deal.  我現在住在台東市的另外一邊.  有的人覺得我的社區很遠, 可是我不這麼覺得.  我有朋友住在更遠的都蘭和成功, 他們每天來台東市區上班.  跟他們比, 我覺得我每天騎15分鐘單車到學校很好.

The nearer end of my street is right next to Bao Sang Middle School, though you wouldn't notice that the middle school is so close unless you climbed up high.  A friend from South Africa once lived in the cul de sac there, but later moved to Shr Chuan, where he still lives.  這條街道的一頭靠近寶桑國中, 可是在路邊看不到那所學校.  要爬到比較高的地方才可以看得到.  以前有位南非的朋友住在這裡, 後來他搬到石川去了, 目前還是住在那裡.

After the cul de sac my street crosses over another, bigger road.  There's a "Beautiful City" breakfast restaurant there, which I eat at very occasionally.  To be honest I don't like their food all that much, but I will eat it if I've been cycling, it's early, and I'm especially hungry.  Next to the "Beautiful City" there's a store selling beer that I've never patronized, and across the intersection from "Beautiful City" there's the "Eastern Garden" lunch box restaurant, which offers, in my humble opinion, some of the best fried chicken in Taitung City.  在街道起點附近過了一條大馬路就有一家美芝城早餐店.  我有時候在那裏吃早餐.  說實話, 我不是很喜歡他們的食物, 但我如果那天很早騎單車運動回來, 肚子很餓的時候會去那裏吃早餐.  美芝城隔壁有一家我沒進去過的啤酒商店.  美芝城對面還有東之園便當.  我覺得他們的炸雞很好吃.

Further up my street there's a freshly painted house for sale.  This house has been for sale for as long as I can remember.  I think the owner must be asking too much for it.  Next to that house there's another house where women spend hours sorting and preparing the leaves used for wrapping betel nut.  I've heard that some people make a lot of money that way.  再過來有棟剛擦好油漆的房子要賣.  這棟房子已經賣一段時間了.  可能它的主人要的價錢太高.  那棟房子的隔壁整天都有一群女人在疊荖葉.  聽說有的人疊荖葉可以賺很多錢. 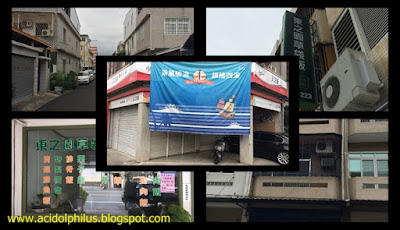 Right next to where I live there's a third floor apartment where a foreign couple lived, years ago.  They were both cool people, and they revisited the area on vacation about two years back.  They had a huge dog and were very outdoorsy - much more outdoorsy than I am.  我家大樓隔壁的公寓以前住有一對外國人士.  他們二個都是好人, 兩年前又來台東度假.  他們養了一隻大狗, 也很喜歡戶外活動.  他們比我更喜歡待在戶外.

Across from the building where I live someone is renovating a house.  I was told that this house was bought by a church group.  A couple weeks ago I saw a dreadlocked foreigner standing in front of this house, and I can only assume he has something to do with that church group.  I would have said hello to him, but he was engaged in conversation with one of the construction workers there.  我大樓前面的一棟房子正在裝修.  聽說是教會買下了這棟房子.  二個禮拜前我看到一位外國先生在這棟房子前.  我猜他是教會的人員.  我想跟他打招呼, 可是他忙著跟施工人員講話.

Still further up there's the tiny Faith Bible Church.  I've never seen anyone go in or out of it, so I can only assume that it's either defunct or the congregation is very small.  Across from the Faith Bible Church there's a new corner restaurant that sells turnip cake, potstickers and a few other menu items, but I have yet to eat there.  This corner restaurant is also close to the Ying Tsai Cram School.  Across from the cram school there's an empty lot where someone is growing sugar apples** and dragonfruit.  再過去有一小小的信心聖經教會.  我沒看過很多人出入, 所以我猜信徒不多或是那棟教會沒在使用.  信心聖經教會對面有小吃部賣蘿蔔糕, 鍋貼和其他食物.  我還沒吃過那裏的食物.  小吃部也靠近英才補習班.  補習班對面有一塊空地.  有人在空地裡種釋迦跟火龍果.

Past the lot there's the other big intersection on my street.  On the corner there's Fang Fu Coffee, which we've never been to.  I suppose that when we're looking for coffee I just forget it's there.  經過空地之後是一大路口.  路口的一角是方埠咖啡.  我們還沒進去過那裏.  我們每次要喝咖啡的時候都沒想到那個地方.

Just past this intersection is where one of my former Taiwanese coworkers lives with her family.  She is an English teacher at Tung Hai Junior High School, and I worked with her for two years.  I'm not sure what she's up to lately, but she was one of my favorite coworkers at the junior high.  過了這個路口就到了我之前同事的家.  她是東海國中的英語老師.  我跟她共事二年.  我很久沒有她的消息了, 可是她是我在東海國中最喜歡的同事之一.

Next to her house there's an empty, fenced field.  On the fence are several handwritten signs, advertising properties for sale in the area.  The cheapest of these properties is in Feng Rong, near Taitung City's Industrial Area (3.5 million NT dollars).  The most expensive is near the Taitung Train Station (28 million NT dollars).  A lot of the newer houses with elevators are near the Taitung Train Station, and most people don't want to live in Feng Rong, so the price discrepancy is no surprise.  她的房子旁邊有一塊圍起來的空地.  籬笆上有些手寫的不動產廣告.  最便宜的在台東市工業區的豐榮 (350萬).  最貴的靠近台東車站 (2800萬).  最新的房子大部分靠近台東車站.  很多人不想住豐榮, 所以價格的差別是當然的事.

After my former coworker's house the road starts to curve around to the right.  On the left there's what is, I think, a Chinese medicine doctor, across from this there's a small temple, and also on the left there are two new buildings used as homestays ("Eastern Vacation Homestay" and "Happy Vacation Homestay"), and finally a more run-down area where there are some old houses and an untended field.  This is where the road ends, not far from the Taitung Fruit and Vegetable Market.  經過我同事家後, 街道開始往右彎.  街道左邊好像是中醫, 它的對面有所小廟.  左邊還有兩棟民宿: 一棟叫東方假期, 一棟叫快樂假期.  街道最後一段有些舊房子跟沒有人在用的農地, 看起來破舊.  這是街路的終點, 也很靠近台東果菜市場.

That, all in all, is my street.  An uneventful place to be sure, but it suits me just fine.  這是我住的街道的樣子, 這裡沒什麼大事發生, 可是這條街滿適合我. 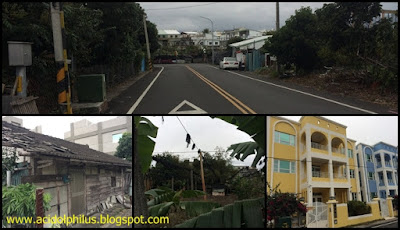 *Everyone I showed the picture to swore it was "Fang Fu Coffee," not "Fang Bu Coffee," but when you try to type it 埠 only appears when you type ㄅㄨ.

**One time I got myself into trouble with this fruit.  Did you know that many Buddhists don't eat sugar apple because it resembles the heads of Buddhist icons?  Seriously.  When someone first told me this I thought they were joking.  I laughed and said the Chinese equivalent of "You're fucking with me, right?"  Turns out they weren't and it got really awkward.
於 3月 01, 2019