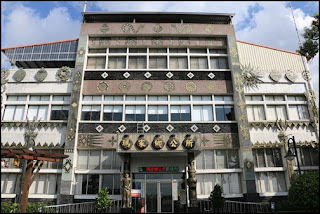 1. Majia Township 瑪家鄉
1a. The former Head of the Majia Township Office Finance and Economic Department was convicted of embezzlement after it was discovered that a contractor had been overpaid for a construction project there.  He was given prison time and required to pay a large fine.  瑪家鄉公所前財經課長與包商  不實實核銷工程款遭判刑
1b. An old monitoring station near Liding Mountain will be converted into a tourist and emergency services center.  Four popular mountaineering routes pass through the area.  小百岳笠笠頂山 !  屏東瑪家鄉公所將成立遊客中心與急救站
1c. Here's an article about sights along Pingtung's Mountainside Highway (185).  Two of the places pictured in this article, Linali Village and Liangshan Waterfall, are in Majia Township. 沿沿著山的幸福道路  探索185縣道的清幽與浪漫 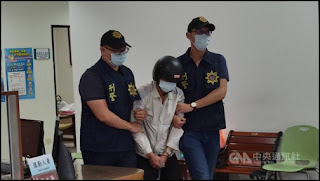 2. Wandan Township 萬丹鄉
2a. There's a particularly dangerous intersection in Wandan.  Police want to install a flashing yellow light at the intersection, while residents think a stop light would be better.  Some argue that vehicles turning at the intersection will have difficulty with a stop light placed on such a narrow road. 道路小 , 駕駛搶快  搶快  萬丹鄉路口車禍頻傳
2b. Scary.  A man driving a car struck a local woman's vehicle and abducted her.  She was later found dead in another location.  The man, a reported nuisance to his neighbors, had harassed the woman at her place of employment prior to the abduction. 屏東假假車禍真擄人命案  凶嫌曾性騷擾死者 (1)
2c. Plans to build an interment facility near the boundary between Xinyuan and Wandan townships drew protests from local residents.  Some of these residents, hoping to develop the area for tourism, dislike the proximity of the proposed site to a popular temple in the area. 屏縣今審殯葬設施申請  萬丹 , 新園鄉民反對 (2) 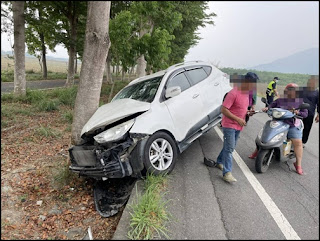 3. Wanluan Township 萬巒鄉
3a. A tourist visiting Wanluan with his family lost control of his car and struck a roadside tree after swerving to avoid a stray dog.  The accident resulted in one death and four people injured. 家庭開心出遊在屏東萬巒閃狗不慎自撞  釀一死四傷悲劇
3b. What was I saying about sugar cane in the Farming in Pingtung entry?  Hmm... nevermind.  A farmer in Wanluan is growing sugar cane and refining it into brown sugar.  He hopes to create a "brown sugar community" in the area, similar to cane-centric communities in Okinawa, Japan. 種甘蔗製黑糖  吳鴻展盼打造萬巒黑糖社區
3b. A KMT legislator recently suggested that the pig's feet sold on Wanluan's famous "Pig's Feet Street" were imported.  Pingtung County's Joint Inspection Team immediately produced documentation to the contrary and demanded an apology. 藍委質疑屏東萬巒豬腳產源  綠委 , 業者氣炸要求道歉 (8) 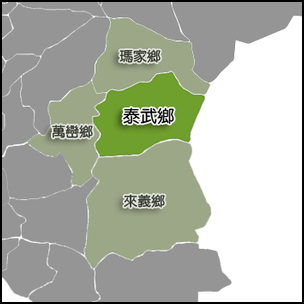 4. Taiwu Township 泰武鄉
4a. No recent news out of Taiwu. 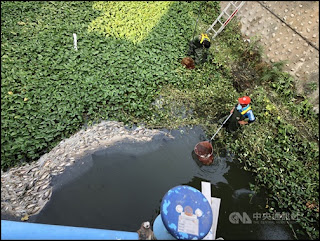 5. Chaozhou Municipality 潮州鎮
5a. The recent drought resulted in a reduced amount of water in the Minjr River, and the death of thousands of fish.  The local Water Management Bureau recently dispatched a team of workers to clean up the fish carcasses from the river. 溪水減少  屏東潮州鎮民治治溪魚群大量死亡 (3)
5b. Here's an article promoting Chaozhou's Sselin Green Tunnel.  潮州泗泗林綠色隧道生機勃勃勃  民眾打卡熱點 (4)
5c. The puppets created by noted puppet maker Su Ming-hsiung will be on display at the Chaozhou Chinese Opera House (Museum). 蘇明雄師徒  " 潮州尪仔 "  屏東戲曲故事館展出 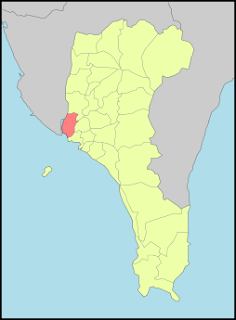 6. Xinyuan Township 新園鄉
6a. No recent news out of Xinyuan. 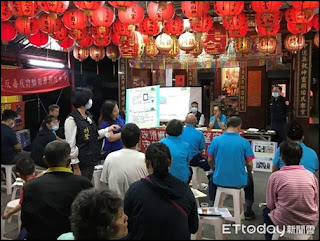 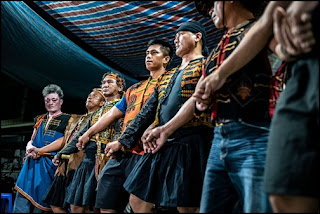 8. Laiyi Township 來義鄉
8a. Not really news, but this article, complete with pictures, talks about the traditional Paiwan way of life, and tribal members returning to the mountain forests to hunt.  Laiyi has the largest number of Paiwan residents in Taiwan. " 山林本事 "  兼顧狩獵與生態  重返森林的排灣族獵人 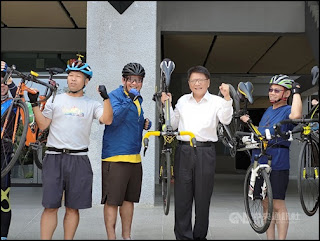 9. Donggang Municipality 東港鎮
9a. The Pingtung County Magistrate and others are encouraging cyclists to visit local "Welcoming in the King's Peace" festivals.  Those considering such a trip should be aware that cycling into many of these festivals is not fun. 東港區迎迎王祭典  青年軍單車環島號召遊遊子遊子回家迎王 (5)
9b. It's tuna season in Donggang, and the Pingtung County Magistrate treated several prominent friends to dinner at a restaurant there.  Wang Jian-ming.  Remember him? 屏東黑鮪魚季季周六開鑼建仔 , 恰恰東港大啖生魚片
9c. The Chairman of the Donggang Fishing Association voiced concern over Japan's plan to dump irradiated water from the Fukushima disaster into the ocean.  Local fishermen were more ambivalent, realizing that there's not much anyone outside Japan can do about it. 日核核廢水將排海  東港區漁會理事長想起一事事驚驚呼 : 嚇死人 (6) 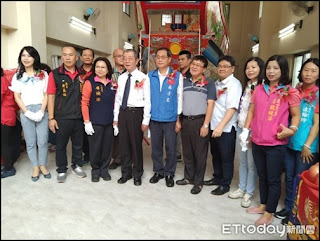 10. Nanzhou Township 南州鄉
10a. Nanzhou is getting ready for its own"Welcoming in the King's Peace" festival.  The pictures in the linked article indicate how much smaller this festival is. 3年一科屏東溪州代天府王船祭  王船點晴儀式隆重莊嚴
10b. There's no swimming pool in Nanzhou, a situation which presents a big problem for elementary schools required to provide swimming classes for their students.  Students from Nanzhou were traveling as far as Donggang to attend these classes, and during one of their trips to the swimming pool their bus was in an accident.南州鄉內沒永池小學生到外地上游泳課  途中遇驚險車禍 (7) 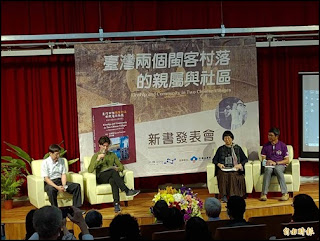 11. Xinpi Township 新埤鄉
11a. An anthropologist who undertook an ethnographic survey of Datie Village in Xinpi spoke recently at the Liudui Hakka Culture Park.  His book was recently translated into Chinese. 一生最有意義的日子就在新埤打鐵 ...  美籍人類學家專書翻譯出版
11b. An elderly man in Xinpi was filmed killing and burning a dog at his residence.  Police later apprehended the man, and despite evidence to the contrary he maintained his innocence.  屏東男子涉殺狗用瓦斯噴槍燒  違反動保法函送
Related Entries 相關的文章:
Farming in Pingtung 屏東的農業 1
Roaming Around Laiyi Township  來義鄉遊記
台灣的老街 Old Streets of Taiwan 1
Pingtung in the News 屏東的新聞 (North 北) 3
1. This was a big local news story, and multiple news outlets reported on it.  There is talk of passing laws to prevent this situation from happening again.
2. Sorry for the vague "interment facility."  I assume it's a place to store ashes, given the county government's push to relocate tombs and mortal remains from land in more populous areas, but it could just as easily be a graveyard.
3. This river, flowing through central Chaozhou, is filthy in the best of times.  Of course the drought was and continues to be a problem, but there may be other contributing factors.
4. Want to go somewhere WEIRD?  By all means visit the Bada Forest Park 8大森林樂園 located nearby.  It's easily the strangest, most perplexing "amusement park" ever.
5. There are three of these festivals in the area.  The biggest and most famous of them is held at Dongloong Temple in Donggang, but there are also smaller festivals on Xiaoliuqiu and in Nanzhou.  Firecrackers, temple processions and heavy traffic don't exactly make for a pleasant cycling experience.
6. Not sure how this irradiated water would make it all the way down to Donggang.  Donggang is on the southwest coast of Taiwan, while Fukushima is on the east coast of Japan.  Politically-minded people love to make statements like this, and it was probably taken for what it was worth.
7. I'm sorry but these "swimming classes" are a joke.  A bunch of partially supervised kids splashing around in a waist-high swimming pool?  Not likely to save anyone's life.
8. An especially embarrassing thing to say given the KMT's efforts to court local voters by opposing imported pork.
於 5月 02, 2021