林園東港漁邊漁樂線 Fishy Things to Do around Linyuan and Donggang

The Chinese below was taken from "A New Appreciation of Fishing" 漁樂新視界.  The Chinese was written by 光啟社 and the English was written/translated by me.  There will be four of these entries, covering the ports in Pingtung County. 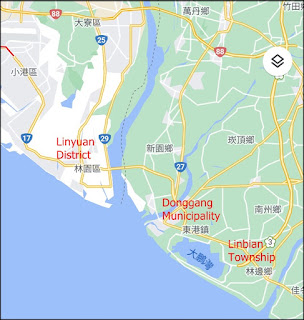 林園東港漁邊漁樂線
Fishy Things to Do around Linyuan and Donggang
東港盛產黑鮪魚, 櫻花蝦, 是台灣重要的漁業重地, 三年一度的王船祭盛況, 更是吸引全台民重的目光, 近年來, 更因為大鵬灣國家風景區的成立, 帶動當地觀光產業的篷勃發展, 是喜愛體驗漁鄉風情的民眾, 必訪的地點. Donggang produces Pacific bluefin tuna and sakura shrimp.  It is one of Taiwan's important fisheries.  The "Receiving Blessings from the King" ceremony is held there every three years, and has attracted the attention of people throughout Taiwan.  In recent years the establishment of the Dapeng Bay National Scenic Area has spurred the development of tourism in the area.  It is a place that anyone wishing to experience life in a fishing village should visit.
林邊和林園以養殖漁業聞名全台.  林園區位於高雄市南端, 主要養殖魚種為金目鱸, 而林邊鄉則是位屏東縣, 與東港鎮相鄰, 以養殖肉質細嫩, 經濟價值高的石斑魚為大宗, 喜愛海鮮的民眾可千萬不要錯過喔! Linbian and Linyuan are famous throughout Taiwan for the fish raised there.  Linyuan District is located at the southern end of Kaohsiung City, and its most important aquaculture product is the Asian sea bass (barramundi).  Linbian Township is located in Pingtung County, close to Donggang Municipality, and its main product is the tender, highly valued grouper.  Anyone who loves seafood should not pass these places by!
How to go?
開車的民眾, 可經由國道1號, 下小港交流道後, 接台17線, 使可以依序抵達林園, 東港, 林邊等地區. Those driving a car can take the Jung Shan Freeway and exit into Xiaogang.  This leads to Highway 17, which passes through Linyuan, Donggang, Linbian and other places. (1)
精彩樂活
Memories in the Making
清水巖 Qingshuiyan ("Pure Water Rock")(3)
清水巖位於林園區潭頭村鳳山丘陵, 以古剎清水寺, 珊瑚礁岩景觀, 及良好的視野聞名全台, 因為有泉水從岩縫湧出, 水質清澈, 故取名清水巌.  清水厳是一清水寺, 在清道光年間便建有廟宇, 經歷代修建而成, 寺內氣祀奉釋迦牟尼及觀世音菩薩. Qingshuiyan is located in the Fengshan Hills (4), in Tan Tou Village, Linyuan District.  The old Qingshui Temple is there, and the landscape was shaped by coral reefs.  The views from there are famous throughout Taiwan.  In ancient times this place came to be referred to as "Pure Water Rock" because of the pure spring water that gushed up through the rocks there.  The Qingshui Temple at Qingshuiyan was established during the reign of Emperor Daoguang, and this temple was improved upon by subsequent generations.  Within the temple are housed images of the Gautama Buddha and the Goddess Kuanyin.
東隆宮 Dong Loong Temple
位於屏東縣東港鎮的東隆宮是東港漁民的信仰中心, 供奉溫州府王爺, 每三年會在農曆九月舉行的 "東港迎王平安祭", 是東港鎮最隆重的宗教盛會, 時間長連七天, 除了遶境之外, 還有王船燃燒時的壯觀場面, 是台灣最盛大的王船祭典, 也是東港當地最重要的文化慶典活動. Dong Loong Temple is in Donggang Municipality, Pingtung County.  It is a place sacred to local fishermen.  This temple was dedicated to a prince in [China's] Wenzhou Prefecture.  Every three years, on the ninth month of the lunar calendar, this temple hosts the "Donggang Receiving Blessings from the King Ceremony."  This is the most important religious activity in Donggang Municipality, and takes place over seven days.  Aside from the passage of idols through the streets, it also features the "burning of the royal boat."  It is the largest such ceremony in all of Taiwan, and also the most important cultural celebration in Donggang. (5)
中芸漁港 Jung Yun Fishing Port
中芸漁港是林邊區最大的漁港, 作業方式主要以拖網為主, 魚貨則是以近海魚類為大宗, 每天漁船會在下午時分出海, 清晨回港交易, 由於魚貨新鮮, 且貨色齊全, 吸引許多民眾來到中芸漁港購買新鮮的海產, 是高雄市南端買新鮮海產的重要地點. Jung Yun Fishing Port is the largest fishing port in Linyuan District.  In this area the most important method of catching fish is dredge fishing, and most fish are caught close to the shore.  The fishing boats leave every day in the afternoon, and return early the following morning.  The catch is both fresh and of high quality, and this attracts many of those eager for fresh seafood to Jung Yun Fishing Port.  It is an important place to buy fresh seafood in south Kaohsiung City.
林園的養殖漁業 Aquaculture in Linyuan
林園區境內魚塭遍佈, 擁有高價值精緻養殖漁業, 主要養殖九孔, 石斑 (龍膽石斑, 老虎班, 點帶石斑), 蝦類 (白蝦, 草蝦, 沙蝦), 鰻魚, 虱目魚, 金目鱸, 金鐘, 紅杉等魚種, 是南台灣重要的養殖重鎮之一. There are many fish farms in Linyuan District, breeding high value species of fish.  Important species include abalone, grouper (giant grouper, "tiger" grouper, orange-spotted grouper), shrimp (whiteleg shrimp, giant tiger prawns, sand shrimp), eel, milkfish, Asian sea bass, "jin jong," snubnose pompano and other types of fish.  It is one of the most important regions for aquaculture in Taiwan. (6)
林邊福記古厝 Linbian's Old Fu Ji Residence
來到林邊鄉, 一定要來參觀林邊鄉內的古厝群, 其中以鄭家 "福記古厝" 最為知名.  "福記古厝" 是傳統閩南三合院建築, 不論是在造型, 建築型式, 或環境方面都保持的相當完整, 充滿古色古香的風味, 值得您細細品味. When you come to Linbian Township you should definitely visit the old residences there.  Among these old residences "the Old Fu Ji Residence," belonging to the Jeng Family, is the most famous.  The "Old Fu Ji Residence" was built in the traditional Taiwanese three-sided courtyard style.  Its structure, architectural style and surroundings have been kept intact.  It is a building rich in history and worth studying in detail. 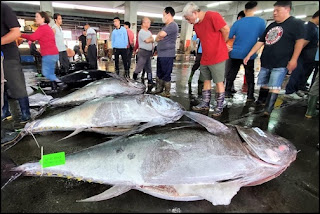 黑鮪魚 Pacific Bluefin Tuna
屏東東港鎮以海鮮聞名全台, 在東港產出的海產中, 以黑鮪魚最為知名, 被警為魚肉中的勞斯萊斯, 是許多餐客的最愛, 每年5月 -- 7月, 就是東港黑鮪魚豐收的季節.  東港當地每年還舉辦黑鮪魚文化觀光季, 內容有盛大遊街活動和黑鮪魚拍賣會, 讓民眾有得吃又有得玩喔! Donggang Municipality in Pingtung is famous for its seafood.  Among all the types of seafood caught in Donggang, Pacific bluefin tuna is the most famous.  This type of fish meat is referred to as "the Rolls Royce of fish," and is a favorite of many diners.  The season for Pacific bluefin falls between May and July of every year, and this season is also referred to as Donggang's Pacific Bluefin Tuna Harvest Festival.  Every year Donggang hosts a Pacific Bluefin Tuna Cultural Tourism Season, which includes large street processions and a Pacific bluefin tuna auction.  It's something everyone must experience! 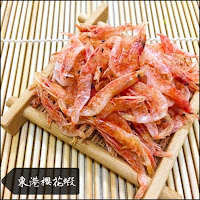 櫻花蝦 Sakura Shrimp
櫻花蝦是東港三寶之一, 東港人又稱之為 "花殼仔", 因為蝦殼帶有花紅的顏色而得名.  櫻花蝦的撈捕量有法令限制, 因此非常珍貴.  櫻花蝦營養價值非常豐富, 是民眾來到東港一定要品嚐的海鮮美味! Sakura shrimp are one of Donggang's "three treasures."  People in Donggang also call them "hua ke dzai" ["flower shelled"] because the shells of these shrimp are red like a flower.  Sakura shrimp can only be caught in limited quantities, so they are considered very precious.  Sakura shrimp have a high nutritional value, and are a type of seafood that everyone visiting Donggang should try. 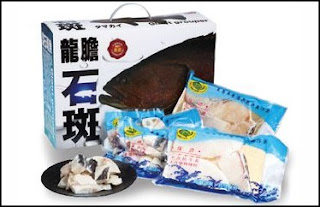 林邊石斑魚禮盒 Linbian's Grouper Gift Box
林邊鄉養殖的石斑魚, 因為品質優異, 獲得農委員會石斑魚生產履歷認證, 並獲選2010水產精品, 為了讓民眾在家中輕鬆烹挑調美味的龍膽石斑, 林邊區漁會嚴選45公斤以上的龍膽石斑, 以急速冷凍的方式處理, 推出龍膽石斑魚真空包裝禮盒, 讓家庭主婦在家用微波, 或是簡單的料理方式, 就能吃到美味的龍膽石斑, 是民眾送禮自用的最佳伴手禮喔! The grouper is farmed in Linbian Township.  Because the quality of grouper [produced there] is very good, farmers there have been certified by the Committee of Agriculture, and [the grouper they produce] was selected as a boutique seafood product in 2010.  As a way of allowing people to more easily cook delicious giant grouper at home, the Linbian District Fishing Association carefully sets aside 45 kg of giant grouper, flash freezes it, and places it in special vacuum-packed boxes that housewives can either microwave or cook using simple methods.  [In this way everyone] can enjoy delicious giant grouper, and these boxes also make an excellent gift! (2)
Related Entries 相關的文章:
An Introduction to Pingtung County 屏東縣的介紹
臺灣開發故事 (南部地區) Stories of the Opening of Taiwan (Southern Area) 4
The New Da Niao Bridge to "Downtown" Dawu 新大鳥橋到大武市區
The Future of Taitung County 台東的未來
NOTE 1: The person who wrote the Chinese text seems a little confused about where Linyuan District, Donggang Municipality and Linbian Township are in relation to one another.  As you drive south from downtown Kaohsiung on Highway 17, the road veers east as you approach Linyuan, the southernmost district in Kaohsiung.  After passing through the petroleum processing zone and passing over the Gaoping River (高屏溪), you then enter Donggang Municipality in Pingtung County.  If you keep going east you arrive in Linbian Township, which is on the other side of Donggang.
NOTE 2: There used to be a DVD (VCD?) set available with this book.  I lost my set years ago, but I remember it being very interesting... IF you find fishing ports interesting.
NOTE 3: I've visited all of these places recently.  My thoughts are, in order: 1) Qingshuiyan's views are NOT famous throughout Taiwan.  All of the people I asked about it - many of them living in Kaohsiung - had no idea the place existed.  It's one of those weird areas I tend to love, but when I went last weekend it was too hot to walk around it.  I want to visit it again when it's cooler.  2) DON'T try driving straight to Dong Loong Temple in Donggang.  It's super popular, and driving down the narrow alleys which surround it is extremely dangerous.  Park some distance away, on the main road if possible, and walk the rest of the way.  The temple itself looks like any other temple, and for non-believers it's only worth visiting during the ceremony mentioned above.  I believe the next one is in 2022.  3) Jung Yun Fishing Port is within sight of the petroleum processing area, not scenic in any way, and has no facilities for tourists.  4) The Old Fu Ji Residence is just an old house.  There are dozens like it between Donggang, Linbian and Jiadong.  If you're already in Linbian you could see it, but if not don't bother.
1. Sounds easy, doesn't it?  Keep in mind you'd be passing through some of the most hellish traffic Kaohsiung has to offer.  As you pass into Kaohsiung's southern port/industrial area the trucks are SCARY, and the road leading south to Linyuan is incredibly dangerous during heavy rains.  For those unfamiliar with the area I'd recommend taking the Formosa Freeway (#3) to the Nanjhou 南州 exit, and then working your way west instead of east on Highway 17.  It'll be a lot less stressful.
2. If you've been to any Taiwanese banquet-style restaurant you've probably eaten grouper.  And yeah, that "housewives" part is kinda sexist.
3. I dislike using "Q" for the ㄑ sound in Chinese, but I figure this is probably how they spell it on English-language signage in the area.
4. The Fengshan Hills are a series of hills stretching south from Fengshan District in Kaohsiung.  Keep in mind that "Fengshan" is an older name for an area between modern day Kaohsiung City and Pingtung County.  "Kaohsiung" and "Pingtung" as official place names are relatively new inventions.
5. This festival is a very, very big deal.  It's featured in all the Social Studies textbooks and is a major tourist event besides.  If you go, be prepared for some traffic.
6. No idea what "jin jong" is called in English.  It translates into "gold bell."  Translated from Taiwanese?  It's the round silvery fish you often see in the markets.  There's a picture here.
於 9月 15, 2020