"Tai Dze" 太子 or "San Tai Dze" 三太子 are other names for the deity known as Nezha 哪吒.  The article on Wikipedia states that he's popular with drivers and gamblers, and he's usually depicted as a young man riding "wind-fire wheels" 風火輪, holding a ring in one hand and a spear in the other.

Taiwan has a few Tai Dze temples, but as an object of worship he's not nearly as popular Tu Di Gong 土地公, Guan Wu 關羽, or Matsu 媽祖.

The temple in the pictures below is just north of Shiao Gang 小港, in Chang Bin Township 長濱鄉.  The location on Google Maps is here.  The rock in the first picture is known as "Man's Rock 男人石," and is also a location in itself.

It's worth noting that the more famous Ba Shian Caves 八仙洞, also in Chang Bin Township, are often described as resembling a vagina.  Both places are considered auspicious in terms of fertility, and both have been host to temples for a very long time. 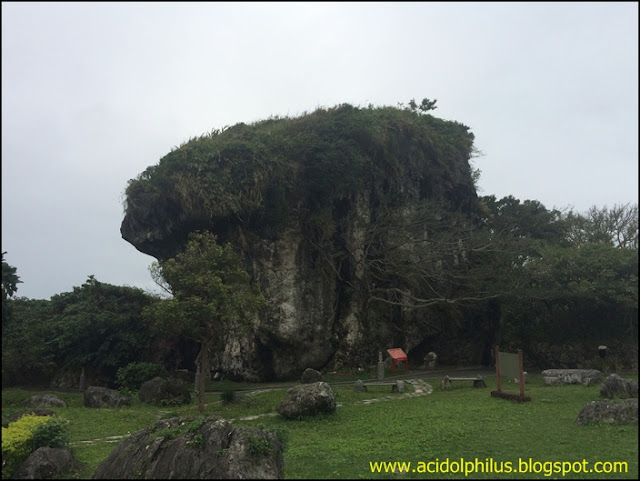 This is Man's Rock.  It's supposed to look like a penis, but I'm really not seeing that.  Maybe it looks more like a penis from the other side? 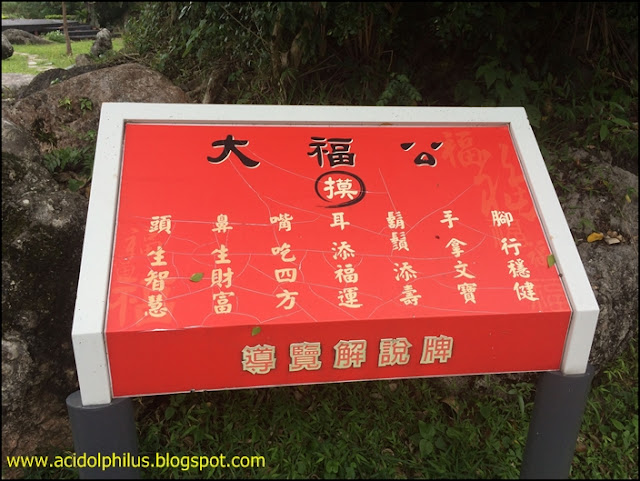 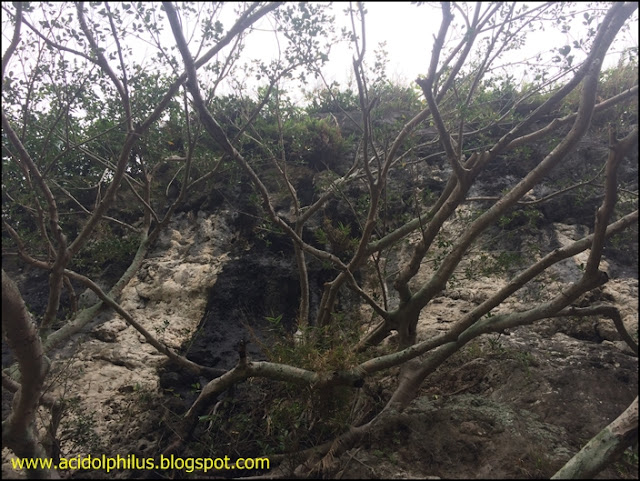 The trees growing out of Man's Rock looked kind of nightmarish to me, but maybe they're prettier when the sun is out. 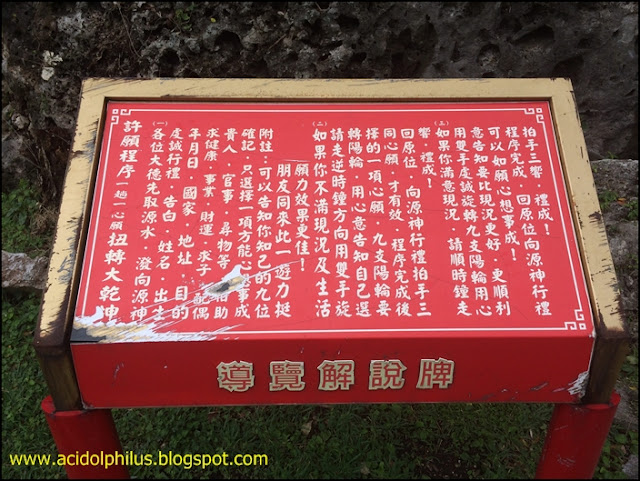 Another plaque describing how to perform ritual observances at the site. 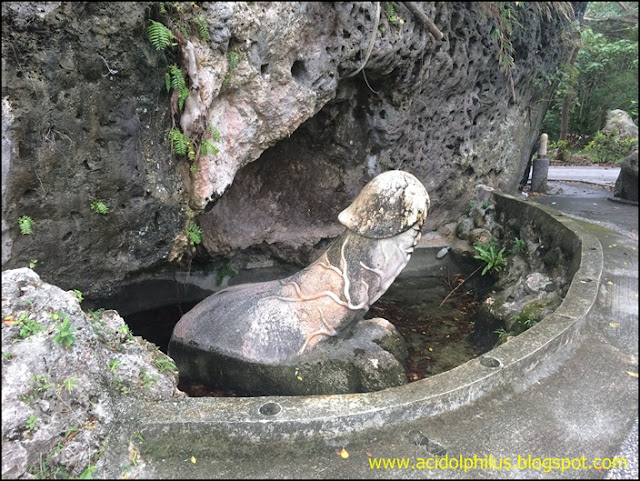 And yes, there are a lot of stone penises set around Man's Rock.  This is where the fertility aspect of the place becomes more obvious. 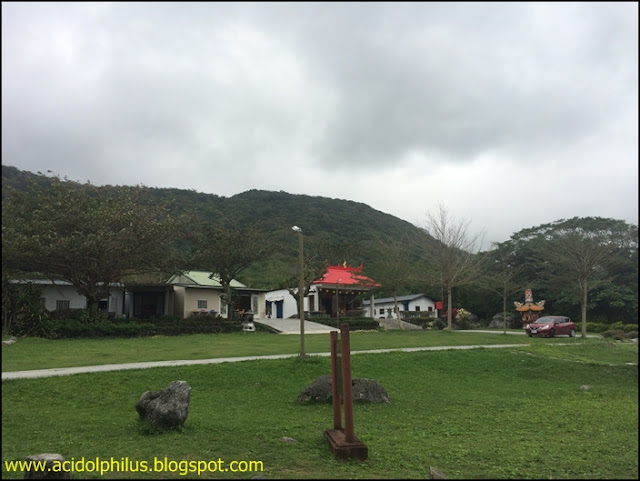 View of the two temples adjacent to Man's Rock.  The one on the right with the red roof is dedicated to (San) Tai Dze. 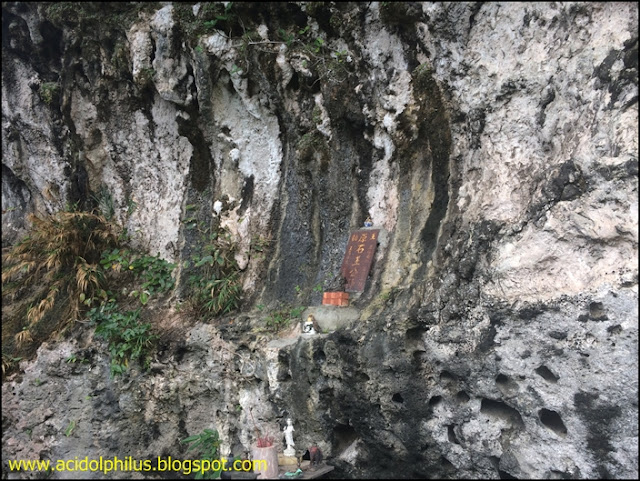 Smaller shrine set into Man's Rock.  There's a small statue of the goddess Guanyin 觀音 below it. 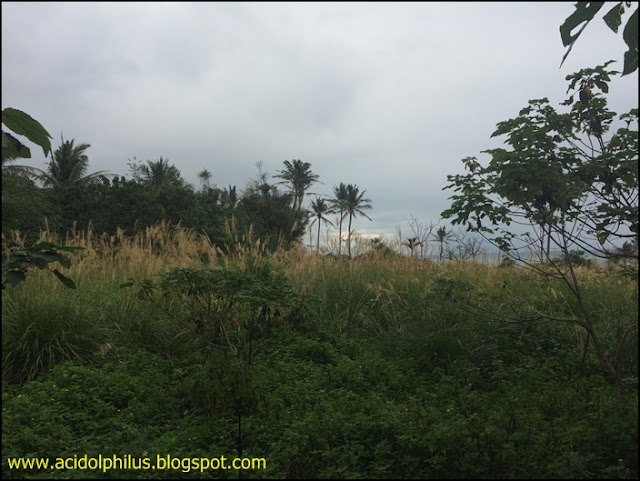 In case you're unfamiliar with Chang Bin Township, there's really not a lot there.  The biggest town is probably "Downtown Chang Bin 長濱市區," and the only thing that place can boast of is a 7-11.  This is a view toward the ocean, which you can't see because of the clouds. 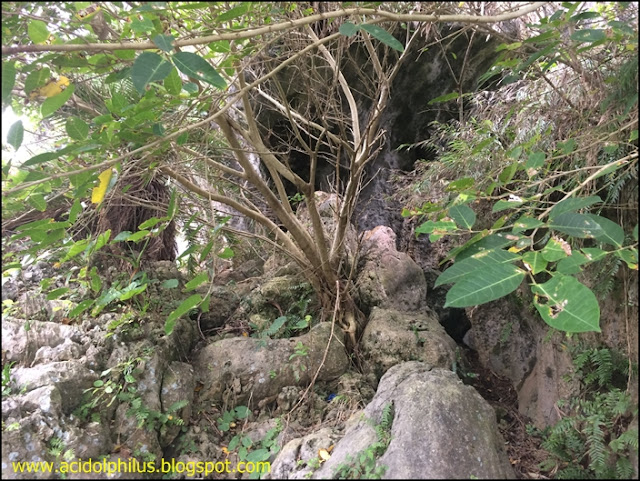 I'd give anyone brave enough to put their arm into one of these holes 100 NT.  Excellent place for snakes to spend the winter. 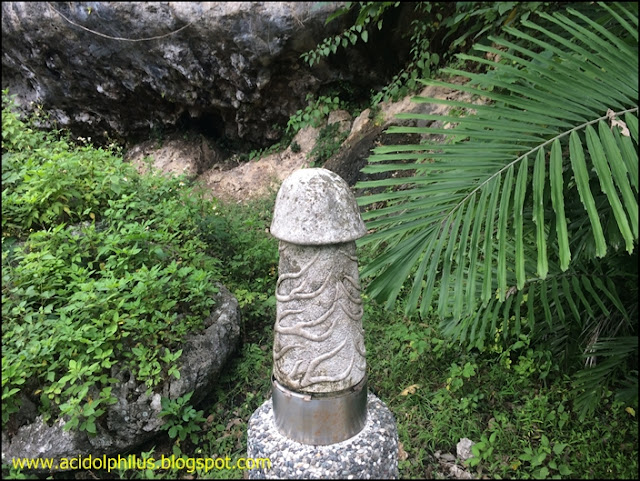 Aside from the big stone penis above, there are many smaller stone penises set in a circle around Man's Rock.  They were made out of different kinds of rock, so they come in different colors. 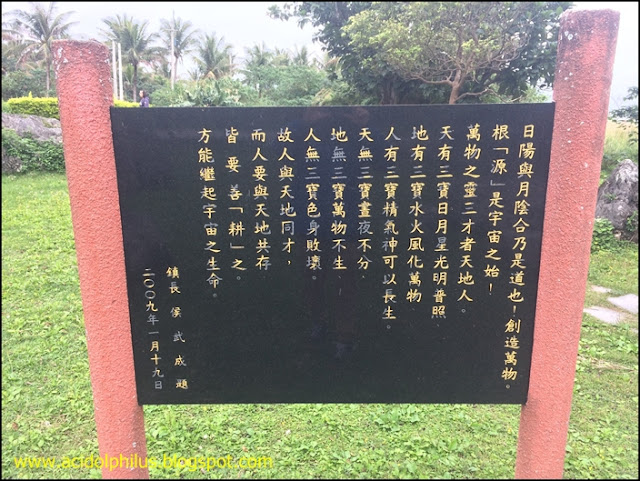 "All things emanate from the Source."  Deep thoughts from a former magistrate. 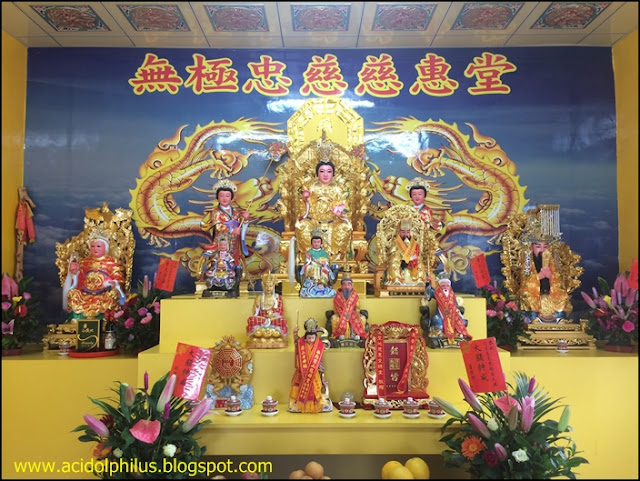 Inside the green-roofed temple.  It's easy to get gods confused, but I'm pretty sure that's (San) Tai Dze sitting on the throne in the middle. 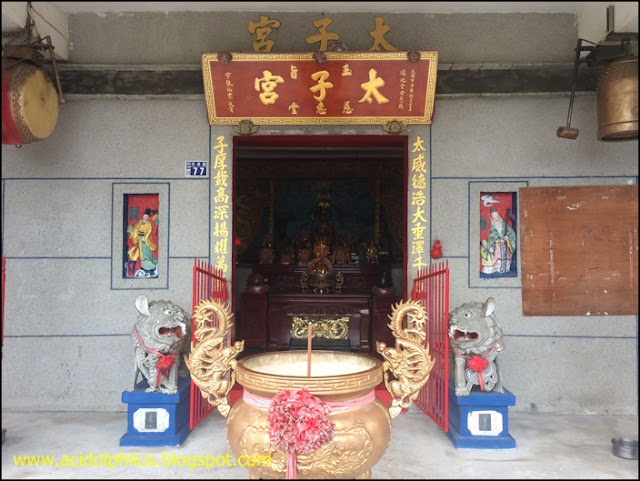 The older, red-roofed temple.  This one is obviously dedicated to (San) Tai Dze, though of course other gods can be found in his temple.

Understanding Taoism can be hard for Westerners like me.  I'm used to separating things into categories and defining terms, while Taoism is more about mixing things up and leaving things open to interpretation. 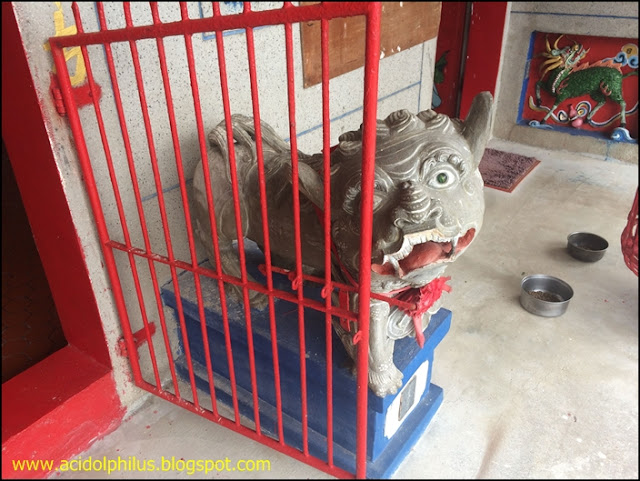 Like all temples, there are lions guarding the entrance.  This particular temple also had a one-legged dog helping the lions stand guard. 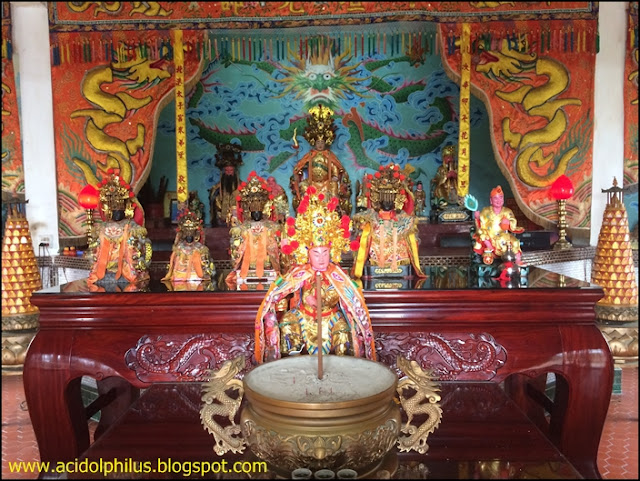 Gotta be (San) Tai Dze seated in front of the incense.  I'm guessing the god seated beneath the dragon is the Jade Emperor 玉皇大帝, king of the gods.  The red-faced guy next to him is probably Guan Yu, and I'm thinking that's Tu Di Gong to the right of the Jade Emperor. 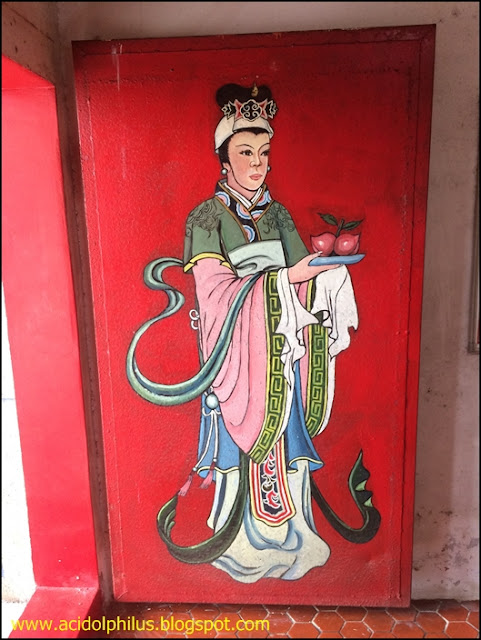 This is a door god (or spirit) 門神.  You see them in many temples.  I have no idea who this one is supposed to represent. 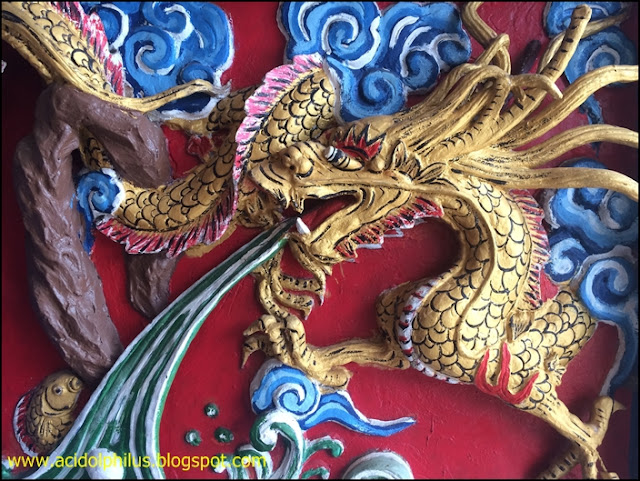 Dragons, lots of dragons.  There's a real art to creating these kind of sculptures, and this art is being lost.  In modern times a lot of younger people don't visit temples, and the number of people able to restore/maintain these sculptures is shrinking. 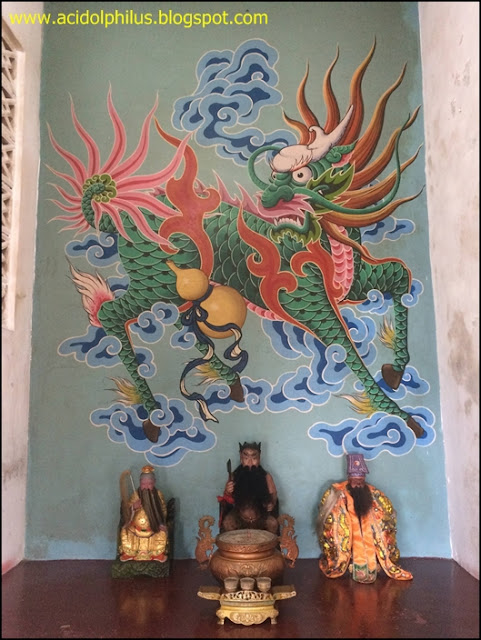 Not sure who these three are, but I'm guessing they're the "Lords of the Three Realms 三界公."  They figure prominently in many Taoist rituals.  I like this dragon most of all.

*I got pretty heavily into Chinese folk beliefs/Taoism a year or so ago, though I am NOT an expert on the topic.  For a broad overview of this topic you're welcome to look here.
於 1月 15, 2019