Ok then, allow me to suggest a few weirder destinations.  These are places absent from most tourist literature, and also places which may or may not agree with your personal sense of "fun."  好吧!  那我來告訴你一些奇怪的地方.  這些地方在大部分的觀光雜誌找不到, 也不一定每個人都會覺得這些地方 "好玩."

Be warned, however, that I am a weird person.  I happen to think Jojo's Bizarre Adventure is the best comic series ever written, I happen to like bands that give other people headaches, and I happen to think that corn on pizza is... ok.  然而你要有心理準備, 我是一個奇怪的人.  我覺得Jojo冒險野狼是世界上最好看的漫畫書, 我也喜歡大部分人聽了會頭痛的樂團, 我也認為披薩上放玉米粒......還好.*

By the way, I've linked many of the places discussed here to Google Maps, and there are some notes after the "Related Entries" below.  對了! 我把以下提到的景點連結上Google地圖, 並且在下面的"相關文章"之後還有些建議. 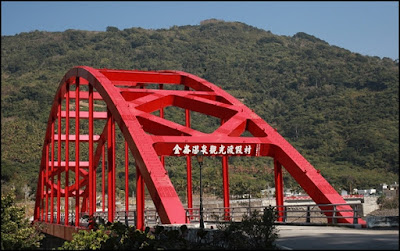 The Jin Luen Hot Springs lie about 45 minutes south of Taitung City, in Tai Ma Li Township.  Most tourists are familiar with the Jer Ben Hot Spring Area just outside the Taitung City limits, but few people make the trip down to Jin Luen, which boasts many smaller (and weirder) hot springs.  Weirdest of all is the saltwater hot spring next to the graveyard.  金崙溫泉位在台東市以南四十五分鐘的車程的太麻里鄉內,   大部分的觀光客比較認識離市區不遠的知本溫泉區, 可是較少人去過比較小的金崙溫泉區, 那裏有多個小一點(和奇怪點)的溫泉, 尤其是墳墓旁邊的鹹水溫泉. (1) 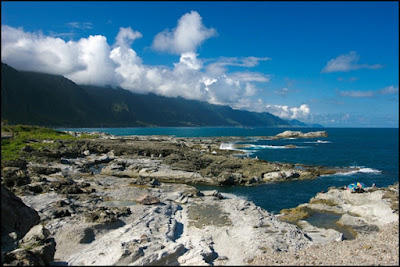 Shr Ti Ping is on Highway 11, not far from the Taitung County Line.  It's a set of stone "wells" eroded into the coastline by the sea.  You can also embark on whale-watching tours from the port near here.  石梯坪在台11線上, 靠近台東縣的邊界.  海邊有許多個慢慢被海水侵蝕出來的石"井".  你也可以在附近的漁港參加賞鯨活動. (2) 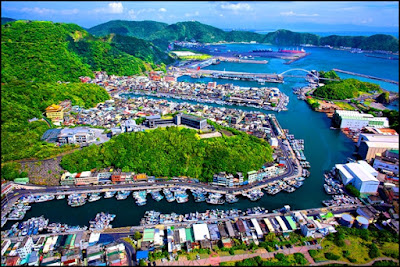 I like boats and I like seafood.  The Nan Fang Ao Fishing Port has both of these things, and it's an interesting place to walk around besides.  The beach near there is unimpressive, but the drive down from the south is very scenic, and it can be a fun place to people-watch.  我喜歡船跟海鮮.  這二樣南方澳都有, 它也是一個適合逛街的地方.  雖然那附近的海灘沒有什麼特色, 可是在公路上從上往下開去的風景真是美不勝收,  也是個看人們工作的有趣的地點. (3) 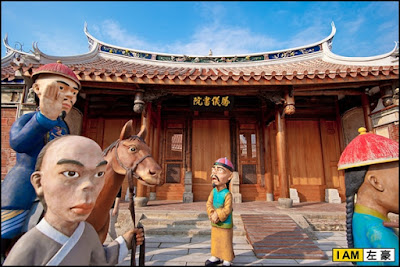 These are essentially the Confucian version of one-room schoolhouses, left over from the Ching Dynasty.  I've been to a few of them, and they range from ominous abandoned structures to tourist-friendly places, full of statues that look like they were imported from the nearest amusement park.  The Feng Yi Academy in Feng Shan District, Kaohsiung City is probably a good place to start.  這是清朝遺留下來的學校建築.  我去過幾間書院,  有的像鬼屋, 有的像遊樂園一樣有可愛的人偶.  如果你沒去過這種地方, 從高雄市鳳山區的鳳儀書院開始最適合. (4)

North of Keelung Port there's a little island (more like a piece of rock) sticking out of the water.  If you want, you can take a boat over there from the port.  Is it an idyllic subtropical retreat?  Nope.  But after you go, you can have a fun time asking people if they've been to Keelung Island!  基隆港北邊有一座小島 (比較像塊大石頭).  你可以從基隆港坐船過去.  它是個美麗的亞熱帶小島嗎?  當然不是, 可是你去過以後就可以神氣的問親戚朋友: "你去過基隆嶼嗎?" (5) 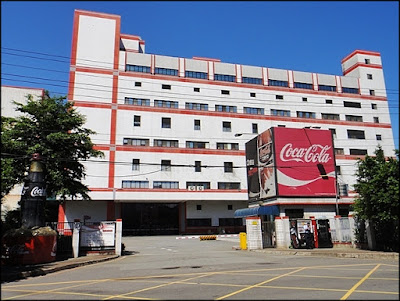 This is part of the bottling plant in Taoyuan.  I have to say I haven't been in there yet.  We drove down there from Taipei, and after arriving found out that you need to make reservations beforehand.  It's in the middle of an industrial area, there's absolutely nothing else interesting around there, but if you're passing through that part of Taoyuan it MIGHT be worth a look.  這是可口可樂桃園的裝瓶場.  我還沒進去過, 因為上次從台北去時, 管理員跟我們說要先預約才能參觀.  它位在工業區中間, 附近沒有其他的景點, 可是如果你碰巧經過那個地區, 應該可以看一下. 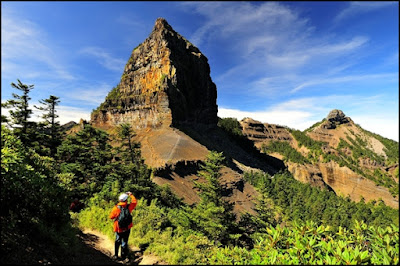 Shuei Ba National Park is my favorite national park in Taiwan.  It can be an ordeal to get to, but the scenery up there is glorious.  I visited it a couple times when I lived in Hsinchu, and I'd say it compares favorably to Jade Mountain and Taroko National Parks.  雪霸國家公園是我最喜歡的台灣國家公園.  去到那裏真是一項考驗, 可是風景令人讚嘆.  我住新竹的時候去過兩次.  那裏的風景跟玉山及太魯閣國家公園一樣好. (6) 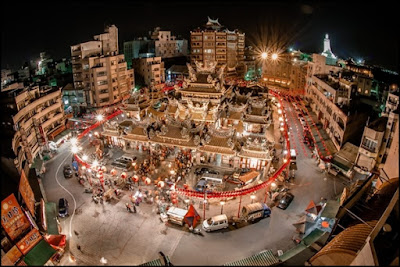 A strange little town around a really old temple.  The temple is seemingly the only thing keeping the town alive, but during temple festivals (of which there are many) this place can be a good time.  There's also an old sugar refinery in this town which has been converted into a tourist destination, but if I were you I wouldn't bother with it.  可愛的小鄉鎮擁簇著古老的廟宇.  廟的存在好像為鄉鎮注入了活力, 有廟會的時候這裡很熱鬧.  這裡也有一座成為觀光景點的舊糖廠, 可是朝天宮真的比較有趣. (7) 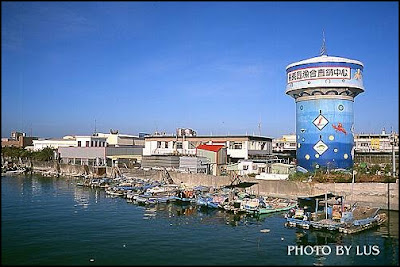 Again, I like boats and I like seafood.  There's a fun seafood market near the fishing port, and walking around the empty roads away from the center of town can be interesting.  While you're in this area you could easily drive into Jia Yi City and visit the City God Temple, which is my favorite temple of that type in Taiwan.  再一次重申我喜歡船跟海鮮.  這個好玩的海鮮市場靠近漁港, 走在市區附近空曠的道路很有趣.  你在這附近的時候也可以順路往嘉義市區的城隍廟走,  那是我在台灣最喜歡的城隍廟. (8) 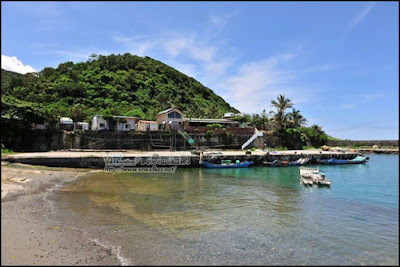 You can approach this area from two directions: from Highway 26 to the south or from Taitung County to the north (via Highway 199 Alternate).  There's NOTHING famous here, but something about its weird, mournful character always draws me in.  I especially like the village of Shu Hai, which boasts one of the saddest hot springs you'll ever see.  你可以從二個方向開車到這個地區: 一是從南邊的26公路或是二從北邊的台東縣199甲縣道.  這個地區沒什麼有名的景點, 可是那裏怪異, 悽悵的特色一直都吸引著我.  我特別喜歡那邊的旭海村,  那裏有著全島最可憐的溫泉. (9)

1. My personal favorite is the "Beautiful Shore" 美之濱 hot spring, but the "Eastern Sun" 東太陽 is also good and has the best view of the river valley.

2. If you go to the port, I would suggest not eating there.  I've haven't had good food there in a while.

3. Nan Fang Ao is near the municipality 鎮 of Su Ao 蘇澳.  If you wind up going to Su Ao, I would recommend NOT visiting the cold springs 冷泉.  There's an interesting trail on the ridge above the city, but the cold springs are lame!

4. If you find yourself getting interested in these kind of places, there are also many old streets 老街 and temples to investigate.  Again, these vary in quality.  Tainan 台南 is a good place to start exploring old streets and (very) old temples.

5. The Keelung Temple Entrance (?) Night Market 基隆廟口夜市 is one of my favorite night markets.  It's within easy reach of the port.

7. Beigang (#8 on this list), and Bu Dai Port (#9) are also really close together.  There's little traffic in that area, so if you're exploring by car it's easy to visit both during the same trip.

8. I also like Jia Yi's night market 文化路夜市.  It won't blow your mind or anything, but it feels very "local."

9. The link used above is for Mudan Township 牧丹鄉, which was about as close as I could get with Google Maps.  What I'm really talking about is the stretch of coast that begins where Highway 26 meets the coast and ends with the village of Shu Hai.  Besides this stretch of coastline Mudan has a lot of other great/weird places, but nothing beats that coastal part for weirdness.
於 11月 29, 2018