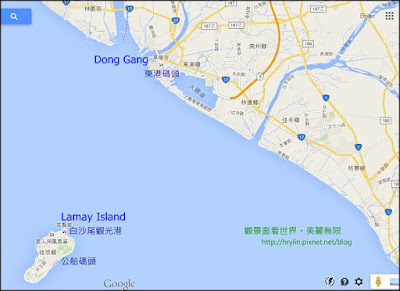 If you treat Lamay Island as more of a journey. and less of a destination, you'll probably be satisfied with it.  Let's say, for example, that you're driving through Pingtung 屏東, and you see signs for the Lamay Island Ferry.  "Hey, let's go check that out," you say, "I've never been there before!"

If, however, you're looking for a romantic getaway, or some kind of "island adventure," then you're going to be disappointed by Lamay Island. 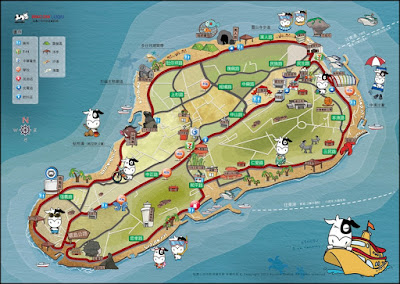 I'm not even sure that "Lamay Island" is the right name for it.  Does it even have an official English name?  Everyone I know just calls it "shiao liou chiou 小琉球," which translated literally means "little Ryukyu."*  I saw the words "Lamay Island" on a couple of homestays there, but the Chinese article on Wikipedia states that "Western people 西方人" referred to it as either "Lambey" or "Lamey" Island.  This same article states that the Siraya Tribe 西拉雅族 were the island's earliest residents.  Maybe "Lamay" is from their language?

However it got its name, you get there from Dong Gang 東港 in Pingtung County.  Dong Gang is a little south of Kaohsiung 高雄, and just north of Da Peng Bay 大鵬灣.

We weren't able to park near the ferry terminal.  On that particular Saturday the terminal was CRAZY with tourists, so we ended up following a tour company's bus to their private parking lot.  At the parking lot we payed for our entire trip through the tour company, and I'm thinking there are probably cheaper options available.  This was the list of fees and the ferry schedule on their wall: 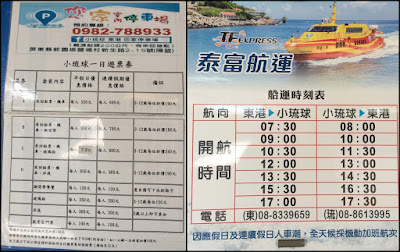 For those who don't read "small" (not to mention Chinese), the fee schedule above states that a round-trip boat ticket and scooter rental is 550 NT.  They add 50 NT to that sum on three and four-day weekends.  You can also add on guided activities like snorkeling, glass-bottom boat rides, and guided tours for extra money.  Most annoying of all, the more scenic and/or historic attractions have all been designated "scenic areas 風景區," and require an additional fee.  If you pay another 100 NT at this tour company, you won't need to pay to get into those places while you're on the island.

As you can see from the picture at the right, the first boat leaves from Dong Gang at 7:30 am, and the last boat leaves Lamay Island at 5:30 pm.  It takes about a half hour to get to the island, and the boat we went on was very comfortable. 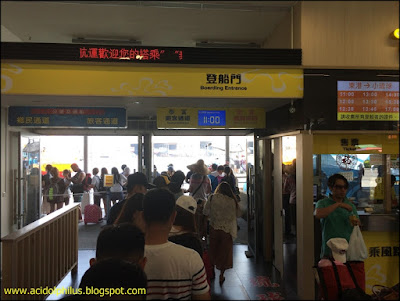 This is the place where people buy/claim tickets and wait for the ferry.  When we were there it was total chaos.  There's nowhere to sit down, and much of the wait is outside, on the dock. 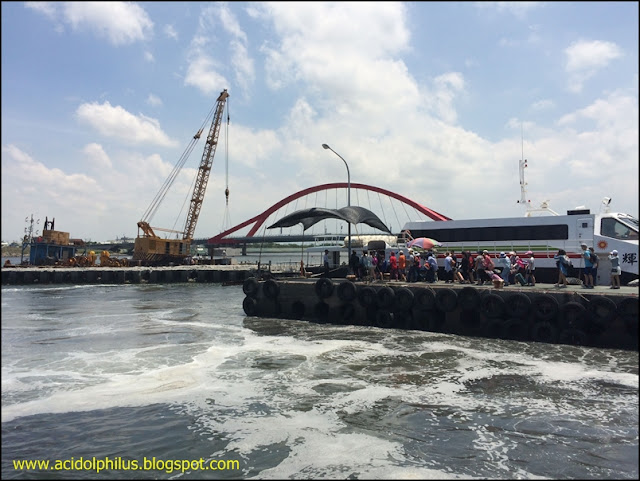 That bridge in the background is Highway 17 台17線.  As you can see, the wait for the boat can get a bit hot.  The white boats are run by another tour company, and may charge different fees. 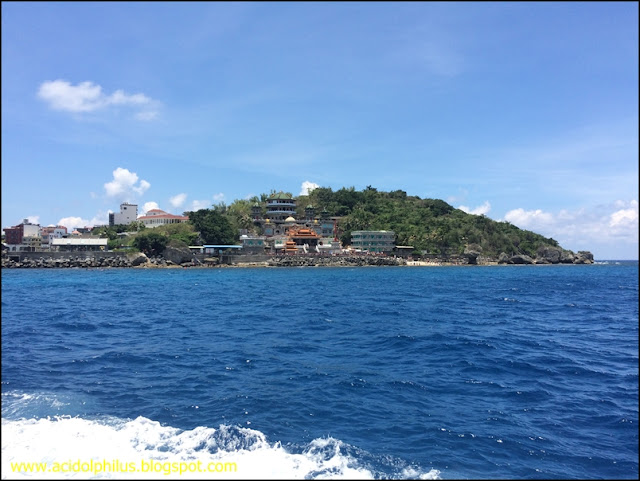 After thirty minutes we could see the island.  My first reaction?  "Wow, that's really small." 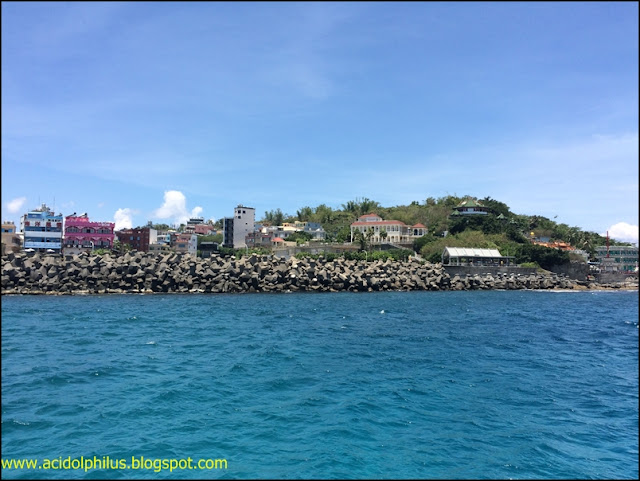 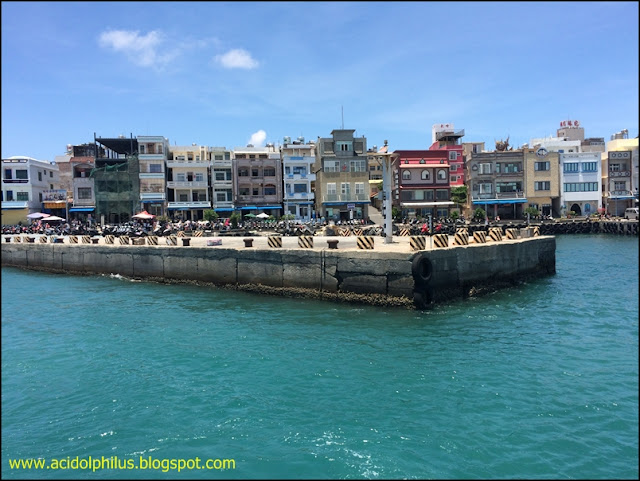 This is "downtown" Lamay Island.  Homestays, homestays, and more homestays.  More homestays, I suspect, than actual people actually resident on the island.

I still don't understand why someone would feel the need to get on a tour bus here.  We rode around the island in a matter of minutes. 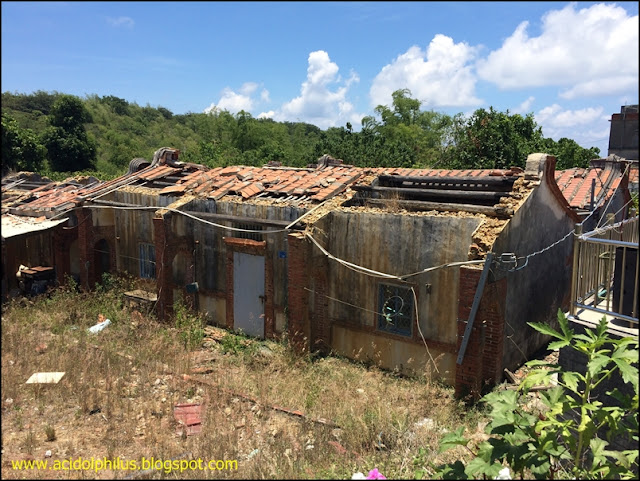 There are many old houses on the island.  I'm guessing that in the "old sleepy days" most people were fishermen, and this is the type of house where they would have lived.  Nowadays they build pretentious-looking homestays and restaurants. 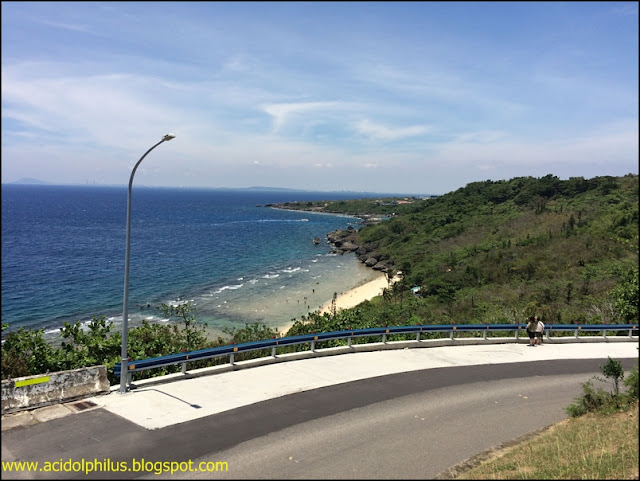 There are some decent views on the west side of the island (the side away from Dong Gang), but the scenery is few and far between.  More than anything this place reminded me of another island I visited near Pattaya, Thailand. 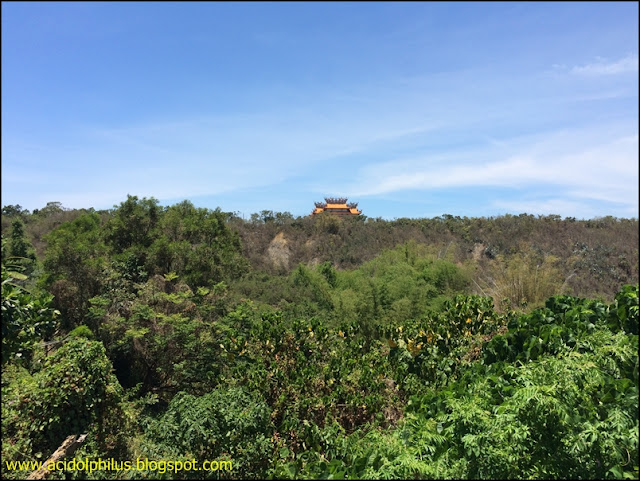 I was told that Lamay Island was Taiwan's largest coral atoll.  I'm still not sure if this is true, but it seems likely.  I still can't figure out why there are so many temples there.

This is the view from the hill above "downtown."  It was hot, we'd been there long enough, and it was time to go back.

So would I go back to Lamay Island?  Not likely.  Living not far from Fu Gang 富岡, Green and Orchid Islands are both more convenient and more fun destinations for me.  If you live in South or Central Taiwan, however, you might find it worth your while to go there.  Even so, a lot of the beach/nature activities possible on Lamay Island are both better and more convenient around Kenting 墾丁.

She Ding Nature Park 社頂自然公園
A Few Pictures of Kenting 墾丁
Mountains, South Taiwan 台灣南部的山景
Riding Around Jer Ben 在知本騎摩托車
*Slight Correction: I had originally suggested that this island could be called "Little Okinawa."  This was misleading.  Okinawa is part of the Ryukyu Island Chain, and thus "Little Ryukyu" is more accurate.  It's entirely possible that Ryukyu-based fishermen and/or pirates named the place to begin with.
於 5月 31, 2018