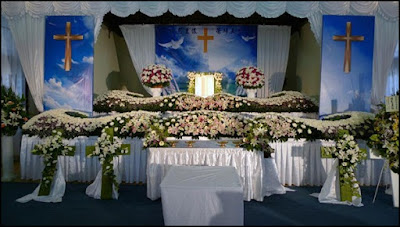 Attended a funeral last weekend.  It was a Catholic service, complete with churchgoers singing spooky-sounding hymns.  Most of those in attendance seemed to be from the same church group, though there was a sprinkling of local foreigners and other familiar people throughout the room.  上個周末參加了一場喪禮.  是天主教的喪禮, 人們唱著恐怖的旋律的聖歌.  大部分參加喪禮的人好像是死者的教友, 也有些是認識的台灣與外國的朋友.

This funeral was for D., an American who'd lived in Taitung for several years.  He is survived by his wife, a woman who was formerly part of my teaching program, and two grown children.  He passed away last Christmas Eve at the age of 74.  這是從美國來的D的喪禮, 他在台灣住了幾年.  他的太太以前是縣政府的外籍老師, 他們有三個已經成年的孩子.  他在去年的十二月二十四日晚上過世.  他過世的時候是七十四歲.

I didn't know him that well.  I'd see him and his wife around town sometimes, but for various reasons our paths didn't cross that much.  He was a good guy - very friendly - and he was always concerned with giving something back to the community.  His "Taitung Stroke Survivor's Support Association" will perhaps be his biggest legacy in Taitung.  我與他不是很熟.  我有時候在市區碰到他們夫妻, 可是真的很少見面.  他是個好人 - 很熱心 - 也很關心社區的人.  他的台東縣台東市腦中風病友支持協會大概是他留下的最大的貢獻.

While I was sitting at his service, I couldn't help but think about other local foreigners that have passed away in recent years.  There was V., the guy into mixed martial arts.  There was H., the guy I used to see at Kasa and Texas Jo's.  And there was R., the travel writer up in Lu Ye.  我坐在喪禮的時候忍不住想到這幾年過世的外國人.  有喜歡混合武術的V.  有在Kasa或是Texas Jo's碰到的H.  還有鹿野的旅行作家R.

R. was in my thoughts more than the other two, if for no other reason than the fact that I knew him best out of those three.  I have very vivid memories of his "funeral"* at Pete's Pizza, which I'm thinking must have taken place last year.  我想到R最多, 因為我跟他比較熟.  我還記得在批薩阿伯裡為他舉辦的紀念會.  這應該是去年的事了.

R. lived in a small town north of here, and I had the feeling he was something of a hermit.  He was married to a Taiwanese woman.  He was regarded as something of a local authority on Taiwan.  I used to run into him in Kasa a lot, and also at another friend's house when that other friend had parties.  R住在北邊的小鄉村.  他好像很少出門.  他跟台灣女性結婚.  很多台東的外國住民覺得他對台灣很熟.  我有時候在Kasa碰到他, 或是在朋友的聚會上見面. 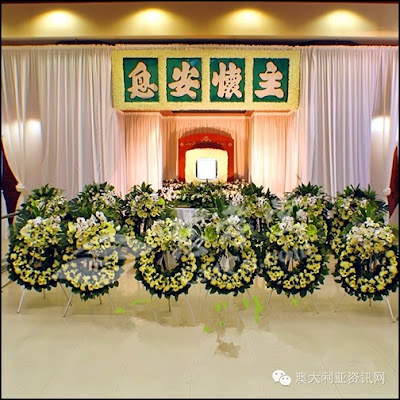 D. lived in Taitung City.  He was a very sociable guy, and it always seemed like he was on the way to somewhere.  He wasn't as widely known among local foreigners as R., but there was a very specific subset of Taiwanese people who knew and liked him.  When he and I talked it was always a general sort of conversation about whatever we were doing lately, and always with his wife's participation.  I tended to see him and his wife in the midst of having their dinner.  D住在台東市.  他是個很熱心很親切的人, 總是覺得他都在忙著去甚麼地方.  沒有很多當地的外國人認識他, 但是有一群當地的台灣人認識他愛他.  我們二個人的談話內容都是關於我們各自正在做的事, 也都是有他的太太在場.  我通常是在他們吃飯時碰到他們.

The differences between D.'s and R.'s personalities are also pretty well illustrated in how they were remembered after their passing.  As said above, D.'s funeral was a very community-oriented, very Catholic affair, whereas R.'s funeral was a much smaller, less religious event.  I'm not trying to say that one funeral was better than the other, though of course those who know me can probably guess which of the two events I had an easier time relating to.  D跟R的個性差別在喪禮的方式就看的出來.  D的喪禮很有社區性與天主教感, 另外一方面R的紀念會比較小, 比較沒有宗教性.  我不是說哪個喪禮比較好, 只是認識我的讀者應該猜得到哪個喪禮比較適合我.

I'm guessing there were thirty or so people at R.'s funeral, mostly local foreigners.  A few of these local foreigners have lived here for decades, even though it was the first time I'd ever met some of them.  They were the kind of guys I doubt I'll ever see again, given the fact that we move in very different circles.  我猜R的紀念會上有三十個人左右.  大部分是外國人.  這些當地的外國人有的住台東幾十年, 可是那是我第一次碰到他們.  不太可能有機會跟他們見面, 因為生活方式完全不同.

People cried during R.'s funeral.  Serious, heartfelt tears.  This isn't to say that people didn't cry at D.'s funeral too, but that was a different, more solemn sort of crying.  People played songs they wrote for R., and pizza was consumed between moments of conversation.  At one point in the afternoon a friend of R.'s stood up in front of everyone - very drunkenly - and announced to the room that R. had been an atheist, and that we should all consider this in the light of how he died.**  There was definitely a weird vibe in that room, but I appreciated the honesty of those present, and their lack of formality.  在R的喪禮有許多人哭.  哭得好傷心.  我不是說D的紀念會上沒有人哭, 只是說哭法不一樣.  有人唱為了R寫的歌, 也有人吃披薩聊天.  那個下午有R的一個朋友站起來, 醉著說R不相信宗教, 而且我們都應該想一下他怎麼過世的, 也要想到他不相信宗教的事實.  當下那個房間裡的感覺很奇怪, 但是我很感謝他們真誠的表現與輕鬆的氛圍.

Cut to D.'s funeral, a year or so later.  Well-prepared speeches and spooky Catholic chanting.  I'm sitting there in a shirt and tie, remembering the sight of D. framed in a car window.  "Where you guys headed?" I could hear him saying, and I wished I could somehow reach into his car, and give him a hug.  Where are you now, D.?  And why aren't you driving that crazy little car around town?  在那之後大約一年, 我在D的喪禮.  嚴肅的演講跟恐怖的天主教聖歌.  我穿著襯衫與領帶, 想念車窗裡的D.  "你們要去哪裡?" 我聽他說.  想到這裡, 我希望我有機會探進車裡抱他一下.  D.你在哪裡?  為甚麼不在市區開你的小車了?

We take so many people for granted until we're attending their funerals.  We think - somehow - that they're always going to be around.  They, of course, think the same thing about us.  I suppose it's easier than thinking about death all the time, or wondering how many years we all have left.  直到喪禮前, 我們都覺得那個人會一直在我們身邊.  我們的想法是他們一直存在.  他們對我們當然有一樣的想法.  誰要一直想人會死亡這件事?  誰要一直想我們還剩下幾年的時間?

Years later, and I'm confronted by the memories of so many people.  For each memory there's a vanished conversation.  That time at D.'s house on Halloween.  That time talking to R. over beers at Kasa.  That time outside Red House talking to V., or that other time talking to H. at a concert.  So many conversations, at so many different places, and when I walk, bike, or drive around this county I can hear the echoes of those conversations, everywhere I go.  這些年下來, 我腦海中留下那麼多人的記憶.  每個記憶都有它的對話.  萬聖節的時候在D的家;  在Kasa跟R一起喝啤酒; 在Red House外面跟V聊天;  還有在音樂會跟H講話.  那麼多對話在那麼多地方發生過.  當我走路, 騎腳踏車和開車在台東時我到處都聽得到.

Even funerals can be a kind of conversation.  It's just that the person being spoken to isn't there to hear it.  甚至喪禮也可以當成一種對話.  只是說話的對象不在現場聽我們說話. 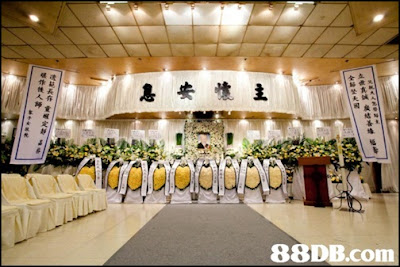 Things to Do in Taitung 台東的活動
This Means War
My First Time on Taiwanese TV
Traintime: Taipei to Suao 蘇澳